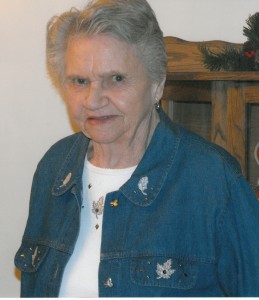 Bettie Lee Stokes, age 89, of Brighton, MO, passed away Wednesday, December 24, 2014 in her home . She was born January 11, 1925, in Springfield, Missouri to Fred and Virgie (Walton) Marlin. Bettie worked several years for Southwestern Bell Telephone Company as an operator. She was united in marriage to George Henry Stokes on June 17, 1946. Bettie enjoyed crafts and listening to Bluegrass Music. Her greatest passion was helping her family on the farm. Bettie will always be remembered for her caring spirit, she always made sure her family was taken care of. She was preceded in death by her husband, George Henry Stokes ; her parents,Fred and Virgie Marlin; one daughter, Janet Stokes; two brothers, Fon Marlin and Walter Marlin; and four sisters Virginia Brooks, Mazie Hargis, Margaret Clemons, and Mary Parker . She is survived by two sons; Mike Stokes and wife Angelyn, Pleasant Hope, MO and Dwight Stokes and wife Cheryl, Brighton, MO; four grandchildren; Shane Stokes, Micah Stokes, Dusty Stokes, and Joey Stokes; two great-grandchildren, Gracie Stokes and Bentley Stokes; one brother, Paul Marlin of Springfield; one sister, Millie Alexander of Willard; and a host of family and friends. A celebration of Bettie’s life will be held at 10:00 a.m., Tuesday, December 30, 2014, at Greenlawn Funeral Home North, Springfield, MO with Pastor Kyle Kearbey officiating. Burial will be held in Brighton Cemetery, Brighton, MO. Visitation will be held from 6-8 p.m. on Monday, December 29, 2014 at Greenlawn North Funeral Home. Services have been entrusted to Greenlawn Funeral Home North, Springfield, MO.