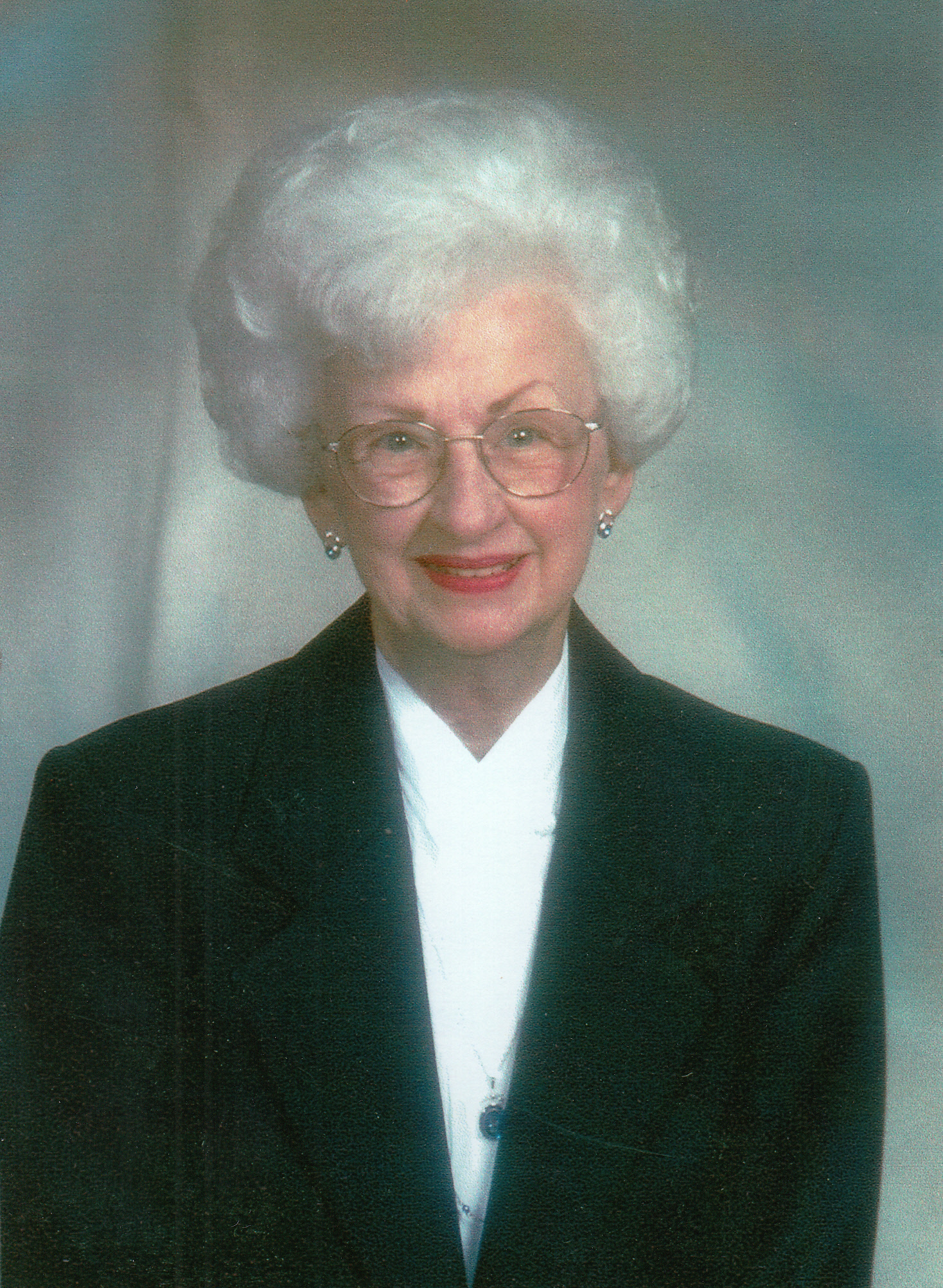 Betty Ann Brittain Harris, an award-winning volunteer for Cox Medical Center, died peacefully Tuesday, August 20, 2019. Betty, a lifelong resident of the Springfield and Strafford area, was 88.
Betty, never accused of being shy or without words, had an engaging personality and a lifelong thirst for serving. She was given a prestigious award in 2013 for the longest record of time on the job as a volunteer for Cox Medical Center—43 years. She was quoted in the Springfield Business Journal as saying “I receive much more than I give. I am just a person who has something to give to others.” If you’ve ever been to Cox South, you’ve undoubtedly seen her. She also had that “signature” silver hair that often put her in photos, TV highlights, and occasionally on stage when a volunteer was picked from a crowd. Betty also served actively on planning committees for 40+ years for her high school class reunions—the graduating class of 1949 from Springfield Senior High School (Central High). Her volunteer work for the “49ers” was valuable because she was one of the few with computer skills. She also logged many hours of service with her church, Pathways United Methodist (formerly Dale Street). She had been a member of that church since the age of 12 and was blessed to have many friends from the church.
Betty was also a great cook and loved to entertain family and friends—even on short notice. A cookbook of her favorite recipes will be on display during the services.
Betty was preceded in death by her parents William R. and Helen Marie Brittain. She was the youngest of three sisters, Maxine DesMarteau of Kansas City and Barbara (Bobbie) Buckner of Tulsa (now deceased). She is survived by her loving and dutiful husband of 69 years, Bob Harris, her sister Maxine, her two children, Brad Harris (Nancy) of Kansas City and Deborah Correll (Dennis) of Conway, two grandchildren, Brad Williamson (Debbie) and Sheri Swartz (Luke), four great grandchildren, Carina, Julia, Quin and Sadie, brother-in-law Ronald Buckner, and eight nieces and nephews, Richard Rice, Georgine Ackerman, Janice Sprague, Rob Butts, and the Buckners–Loretta, Dwayne, Michael and Leigh Ann. She loved being a wife, a homemaker, a grandmother and great grandmother, a den-mother, and loved all her nieces and nephews as her own.
A Celebration of Life Service will be held at 11:00 a.m. Monday, August 26th at Greenlawn Funeral Home North, 3506 North National Avenue, Springfield, MO. Visitation is from 10:00 to 11:00 a.m. before services, followed by interment at Eastlawn Cemetery. Memorial donations suggested to the Pathways United Methodist Church.