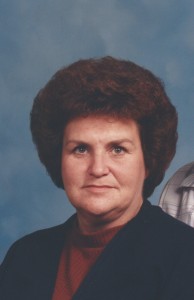 A Celebration of Life service for Betty Gene “Pat” Arnold age 77 of Omaha, Arkansas will be held at 11:00 AM, Saturday, January 24, 2015 at Greenlawn Funeral Home in Branson. Burial will be at a later date in the Cedar Valley Cemetery.
She died January 15, 2015 in the North Arkansas Regional Medical Center in Harrison, Arkansas.
She was born on January 15, 1938 in Enon, Arkansas the daughter of Albert and Ida Jones Robison. She was a lifelong resident of the area and had worked several jobs before her illness. She and her husband had poultry houses for several years, she had been a beautician and also worked as a greeter at Wal-Marts Super Center in Branson. She was a member of the Calvary Temple Full Gospel Church in Blue Eye, Missouri.
Survivors are her six children: Jeff (Mary) Arnold of Hollister, Mo., David (Lisa) Arnold, Shannon (Amy) Arnold and Steven Arnold all of Omaha, Arkansas, Yvonne (James) Rogers of Branson, Missouri and Debbie (Jack) Peden of Omaha, Arkansas. Three sisters; Mary Gross of Ridgedale, Mo., Stella Powell of Springfield, Mo and Linda Essary of Omaha, Arkansas. Sixteen grandchildren and 22 great grandchildren. She was preceded in death by her parents, her husband James Arnold and one brother, Sherman Robison.
A visitation will be held from 6:00 until 8:00 PM on Friday, at the funeral home.