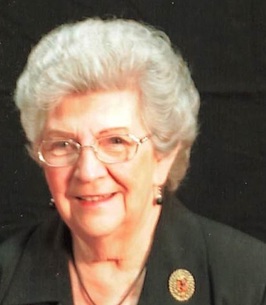 Betty J (Slankard) Hundley was born on March 31, 1930 to Henry O, and Ada (Bradford) Slankard, in Piggott, Arkansas. Betty grew up in Kennett, Missouri and graduated from high school in Blytheville. Arkansas. Betty married Robert L. Hundley on June 5, 1949. In June of 2019, they celebrated their 70th wedding anniversary.

Betty and Bob spent over 40 years in Flint, Michigan where Betty retired from the General Motors Corporation administration after 30 years of service. She was an active member and Sunday School teacher at the Riverside Tabernacle (Assemblies of God) in Flint.

In 1990, Betty and Bob purchased their retirement home on the Current River in Van Buren, Missouri where they spent 14 years and enjoyed being members of the Van Buren United Methodist Church. Betty enjoyed cooking, baking, serving and visiting and known for her ‘chicken and dumplings and ice cream pie.’ In the fall of 2005, they moved to Maranatha Village in Springfield, Missouri, where she died on February 11th after a long battle with Alzheimer’s. Betty has been a resident of the nursing care facility for the last 15 months and served as the unofficial greeter that was constantly on the go. Everyone loved Betty.