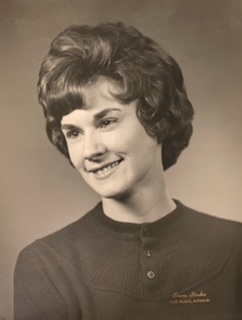 A Celebration of Life will be held at a later date in the Spring.

Betty Sue Babb, 79, Willard, MO. passed away peacefully with family by her side, December 3, 2020. She was born on October 26, 1941, in West Plains, MO. to Wade and Faye (Garrett) Mullins. She was a graduate of West Plains High School and attended M.S.U. She was a retired accountant at Ball Supply Company. Betty was devoted to her family and she most loved spending time with grandchildren in retirement. She loved to travel, she was an avid reader, enjoyed painting, knitting, and especially her beloved Schnauzers.
Betty was preceded in death by her parents, her husband, Robert F. Babb, who passed away in 2013, they were married for 50 years, united in marriage in 1963, in Nixa, MO. she is also preceded in death by her sister, Mary Watson, two infant brothers and a great-grandson, Damon Colt. She is survived by her son: Timothy F. Babb, of Perrysburg, Ohio, and two daughters: Tammy S. Burch and Cindy D. Peterson (Steve) both of Willard, MO., seven grandchildren: Michael, (Whitney), Alex (Dustin), Kory, Erik (Shelby), Haley (Cody), Lauren, and Marissa, nine great-grandchildren: Kylie, Ryder, Presley, Nolan, Caroline, Clayton, Cora, Josie, and Lukas, two sisters: Wilma Rose Cozort and Donna Faye and Bill Rippee, as well as a host of nieces, nephews, cousins and many friends.
A Celebration of life will be held at a later date next spring. Inurnment will be at Missouri Veterans Cemetery, Springfield, Mo. The family suggests memorial donations be made to the National Psoriasis Foundation in memory of Betty.

A Celebration of Life will be held at a later date in the Spring.