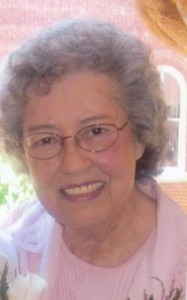 Beulah Marie Boyer, 82, of Springfield, MO. (formerly of Carthage, MO), passed away peacefully on October 12, 2015, in Springfield, MO. She was born September 15, 1933 in Carthage, MO., and attended school there. Beulah was a Home Maker. She married Bud Boyer on October 3, 1954, and was of the Christian faith. She enjoyed shopping, fishing, cooking, and caring for her family. Beulah is preceded in death by her father and mother, Ashley and Mae Smith, one brother; Leon, and two sisters, Dreweal and Betty. She is survived by her husband, Bud Boyer, one daughter; Lesa Barrett and husband, Brooks, two sons, David Boyer and wife Cindy, and Mike Boyer and wife Cathy. Also surviving are nine grandchildren; Kyle, Krystal, Lindsey, Jason, Cole, Cooper, Cailey, Matt, and Josh, four great-grandchildren; Kynlee, Kyler, Dustin, and Jentry, and also many nieces, nephews, cousins, neighbors, and a host of friends. Visitation will be Wednesday, October 14, 2015, 6:00-8:00pm, at Greenlawn Funeral Home North. Funeral will be Thursday, October 15, 2015, 10:00am, also at Greenlawn Funeral Home North. Interment will be in Maple Park Cemetery. Memorial donations may be made in her memory to: Southwest Missouri Humane Society, 3161 W. Norton Road, Springfield, MO 65803.