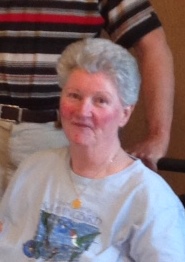 Billie Ann Beyer, age 73, of Bolivar, MO, passed away Friday, March 13, 2015, at Parkview Healthcare Facility Bolivar, MO. She was born on May 19, 1941, in Springfield, Mo, to Edgar and Nancy (McCurdy) Doyle, their only child. As a teenager she was involved with student government and had primary interests In art and music. She continued with art work in decoupage for many years. She was united in marriage to Norman Beyer in Springfield, MO, June 5, 1960. They had their only child, Marcus, in 1963.
Billie Ann served as Christian Educational Director of the Christian Church of Eldon, MO and later served as the Central Office secretary of the Missouri Speech-Language-Hearing Association during the 1970’s. Her diagnosis of Multiple Sclerosis put an end to her career outside the home, but she continued to work as her husband’s Office Manager in his Speech and Hearing private practice throughout the 1980’s.
Through the 1990’s-2013, Billie Ann and Norman lived in Bourbonnais, IL. She became an avid fan of Michael Jordan and the Chicago Bulls and enjoyed musicals, especially The Phantom of the Opera. In 2008, Snoopy, a Chihuahua-terrier, joined the family and became her closest friend.
She was preceded in death by her parents.
She is survived by her husband, Norman Beyer of the home; her son Marc Beyer and wife, Janet of Bolivar, MO; two granddaughters: Jacqueline Robinson, husband Justin and their son, Seth of Bolivar, MO, and Angela Beyer and her daughter, Sarah of Bolivar, MO; her dog, Snoopy; and a cousin, Sally Listerman of Springfield, MO; as well as other relatives and friends.
Private family memorial services will be held at a later date. Memorial contributions may be made to the Polk County Humane Society P.O. Box 334 Bolivar, MO 65613. Arrangements have been entrusted to Pitts Chapel Bolivar, MO.