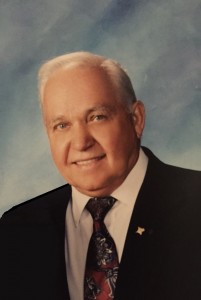 Billy Joe Beatty, 83, of Brighton, Mo. passed away July 2, 2016 at his farm after a short battle with Kidney Disease. Born October 13, 1932 in Lexington, Mo. he is preceded in death by his loving parents Bryan and Myrtle Beatty, his brother Edward, and two of his sisters, Mozelle Gagne and Ova Jean Barbata. Mr. Beatty was survived by wife Deloris Smith Beatty of 63 years. He is also survived by his sister, Betty Blatt, Independence; and his brother, Kenneth (Mary Lou) Beatty, Arizona. Three children; Son, Will (Peggy) Beatty, Bolivar; daughters, Diane (Jim) Dean, Fair Grove; Leigh Ann (Warren) Hinkle, Nashville, TN. Five beautiful grandchildren, Hannah (Chris) Falk, Bryan (Danielle) Beatty, Ellen (Michael) Vest, Emily Hinkle, Luke Beatty and four great grandchildren Beau & Boone Beatty and Parker & Kinsley Falk and loved by all nieces and nephews.
He was a member of the Oak Grove Baptist Church in Joplin. During his lifetime he had resided in Lexington, Joplin, Strafford, and Nashville before retiring in Brighton.
He was an over the road truck driver for Consolidated Freightways, retiring in 1993 and a Teamster in Local 245, Nashville. He served as a Staff Sgt. in the US Army during the Korean Conflict.
He was a lifetime member of the VFW Post 3404, Springfield; the American Legion Post 138 of Bolivar; DAV Chapter 66 of Bolivar and the AMVETS Post 188 of Willard. He served as Chaplain for the Amvets 5th District and post 188.
Bill was very involved in Masonic activities in the state. He was a 33° Scottish Rite Mason, Valley of Joplin. He was a lifetime member of the following organizations: Lodge 335 AF & AM in Joplin where he served as Worshipful Master in 1974. York Rite, Red Cross of Constantine, St. Andrew Conclave. Joplin Chapter # 91 Royal Arch Masons: Jasper Council # 30, Cryptic Masons and Ascension Commandery No. 39, Knights Templar. The Lake Stockton Shrine Club and the Abou Ben Adhem Shrine Temple, Springfield. He was a former member of the Director’s Staff and the Joplin Shrine Club where he served in the Oriental Band and a former member of the Laclede County Shrine Club, where he was instrumental in forming the “Keg Patrol” that performs at parades in this area. He is a member of the Dallas County Shrine Club in Buffalo, Mo. He also was a 25-year member of Temple Chapter #95, Order of Eastern Star, Joplin.
Bill has served in many areas of the Grand Lodge AF & AM of Missouri. He was honored with the commission of Grand Representative for Grand Lodge of Missouri to the Grand Lodge of D’Andorra. Bill was also appointed by the Grand Lodge to serve twice as officers for the Grand Masters. He was honored with a membership in the Harry S. Truman College in Buckner, MO and has a lifetime membership in the Royal Order of Scotland. He was presented with the Grand Cross of Colors from The International Rainbow Girls, Hope Assembly, Joplin. Later he was presented the “Harry S. Truman Medal of Honor” by the Grand Lodge of Missouri AF&AM. This honor is presented each year to only one Mason in the State of Missouri.
Other honors include: “Honorary Member for Life” in the Mother Chapter of DeMolay for Boys in Kansas City and The International Supreme Council of the Order of DeMolay designated him to receive the “DeMolay Legion of Honor”.
Bill was a collector of all things. One of his many hobbies was woodworking. Bill made many rocking chairs for grandchildren among other craft project like coin bowls and tool boxes. He made gavels and masonic working tools for many of the Masonic and Veteran’s organizations in Missouri. He also enjoyed making designer birdhouses and gavels for many of his friends.
In lieu of flowers, the family request donations be sent to the children’s charity, Scottish Rite Speech and Language, Joplin Clinic, in care of Scottish Rite 505 South Byers Joplin, Mo. 64801.
Celebration of Bill’s Life will be at Greenlawn East Funeral Home Springfield. Visitation: Wednesday, July 6, 5:00 to 8:00pm with 7:30pm Masonic Ceremony. Funeral: Thursday, July 7, 10:00am. Graveside service with Military Honors, 1:00pm Ozark Memorial Park Cemetery, Joplin.