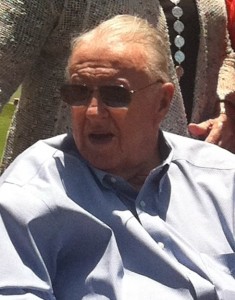 Carl Clay Pursley, age 80, passed away Wednesday, December 10, 2014, was born December 27, 1933, in Bolivar, MO, the son of Carl C. Pursley and Belva (Wilson) Pursley. Carl was saved at an early age in Pleasant Hope at a revival meeting. He was united in marriage to Elizabeth Ann (Hopkins) Pursley April 26, 1952, and to this union one son was born.
Moving to Springfield in 1955, Carl worked for Hoffman Taft later being purchased by Syntex Agri-Business for 40 years retiring in 1995. He served as safety coordinator for Syntex several years and taught CPR, and First-aid classes for the Red Cross and Syntex. He also played fast pitch softball as a pitcher. He was Santa Claus for needy homes for 35 years helping Syntex matched by employees to deliver $100,000’s in food, clothing and other items. He was a long time member of the Masonic Lodge #271 and Elks Lodge #409 of Springfield.
After retiring, Carl enjoyed spending time at Bob Jones Used Cars enjoying his favorite hobby, cars. He also enjoyed keeping a perfect lawn, and traveling, Aruba being his favorite.
He was preceded in death by his parents; and a brother Billy Hess Pursley.
He is survived by his wife of 62 years Elizabeth Ann Pursley of the home; his son Carl Steven Pursley of Springfield, MO; his aunt Grace Pursley of Bolivar, MO; as well as numerous nieces, nephews, cousins, other relatives and friends.
Funeral services will be held at 10:00 AM Saturday, December 13, 2014, at Pitts Chapel Bolivar, MO. Burial will follow at Greenwood Cemetery Bolivar, MO. Visitation will be held from 6:00 to 8:00 PM Friday, December 12, 2014, in the funeral home. Memorial contributions may be made to Regional Hospice: 1328 E. Evergreen Springfield, MO, 65803. Online condolences may be made at: www.greenlawnfuneralhome.com. Arrangements have been entrusted to Pitts Chapel Bolivar, MO.