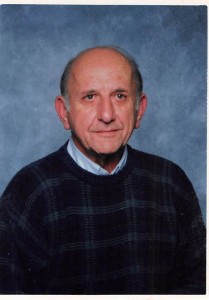 Charles A. Charle 81, was born on February 23, 1934 in Springfield, MO. He passed away on August 4, 2015.
Charles was employed for over 40 years with BNSF RR, formerly Frisco, ending his career as Regional Office Manager. As a teenager, his passion for softball began and he proceeded to dominate Springfield fast pitch softball for over 20 years with the teams winning several National Titles. After retiring from the game at age 37, he became a well respected umpire and was honored by being inducted into the Amateur Softball Assn. Hall of Fame. After his ball playing days, he became an avid fisherman, enjoying the area lakes and over 30 annual fishing trips to Canada.
Charles was preceded in death by his parents, Charles S. and Lucille Charle, his wife of 48 years, Donna Jo Rothermel and his oldest daughter Charlotte Ann Sharp.
Charles had many who loved him and are left to cherish his memory, including his wife of nearly 13 years, Tonya (Armstrong) Charle, his daughters: LuRita McMillen, Melinda McDaniel, Mary Vance, Debbie King and husband Randy. Three step-children: Jay Harris and wife Laurie, Scott Harris and wife Barbara, and April Wheeler and husband Mike. Twelve grandchildren, five step-grandchildren, eleven great-grandchildren and three step-great-grandsons.
Visitation will be Friday, August 7, 2015, from 6:00 to 8:00 p.m. at Greenlawn Funeral Home North, with funeral services on Saturday, August 8, 2015, at 10:00 a.m. Burial will follow in Greenlawn Memorial Gardens, In lieu of flowers the family suggests a donation to: Springfield Greene County Park Board Scholarship Fund: 1923 n. Weller, Springfield, Mo. 65803, please note Charles Charle on contribution.