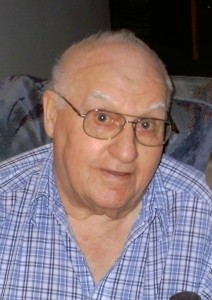 Charles Robert “Bob” Johnson told the best stories, always making his audience laugh. This is his story…he began his life on February 4, 1928 in Wayne, Michigan. Bob moved back to Missouri six months later, where he would reside for the majority of his life. In August of 1942, Bob became a Christian during a service at Calvary Baptist Church in Bolivar. He graduated from Bolivar High School in 1946. During his childhood, Bob and the Sterling family members created a lot of his best stories, often on the farm and some involving cow manure and a shiny new pocket knife or fighting cousins and burlap sacks.
Adventure, hard work, and love were all added to Bob’s life story as time passed. After graduating, Bob enlisted in the Army during January of 1947 and served his country for a year and a half. When he came back home to Bolivar in 1948, Bob eventually started working for the Missouri Department of Transportation, where he would work for the next 38 years. Then in February of 1949, Bob drove home some of his cousins and one of their friends, Donna Root. After he dropped off all the cousins, Bob drove back to Donna’s and asked her out on a date. They ran off and eloped on July 15, 1950. The couple would move all over Missouri for Bob to work on projects for MODOT. They added to their family in the midst of the moves when their daughter, Pamela, was born. Later, they would also have a son, Steven that they lost to Sudden Infant Death Syndrome two months later. By the time Bob retired from MODOT in 1986, he’d also become a grandfather to two granddaughters, Maria and Stephanie.
Bob used retirement to add to his sharp mind and favorite hobbies, using his time to fish (which he loved all his life), garden, and become quite the carpenter. His gardens grew some of the best fruit and vegetables….except for corn, which coons often stole before the harvest. Not only was he known for sharing his garden crops, Bob used his carpentry skills to build many a dollhouse, barn, stable, car, décor, or piece of furniture for the people who were important to him. He was known for his generous heart. On that note, his family wishes that in lieu of flowers, donations be made to St. Jude’s or Convoy of Hope.
Due to complications from triple bypass surgery, Bob went home to be with his Savior on January 12, 2015, where we expect he is enjoying a great family reunion, Lou’s homemade rolls and pies, and hours of fishing.
To honor Bob and celebrate his life, there will be a visitation at Pitts Chapel in Bolivar on Saturday, January 17th from 12:30 to 2:00. The funeral will immediately follow beginning at 2:00 with a burial afterward at Greenwood Cemetery. Online condolences may be made at: www.greenlawnfuneralhome.com.
Bob was preceded in death by his mother and father, Lou and Orville Galyan; his father-in-law and mother-in-law, Ray and Opal Root; and his son, Steven. He is survived by his wife of 64 years, Donna Johnson of Springfield; their daughter, Pamela Tate of Willard; granddaughter, Maria Tate of Willard; granddaughter and husband, Stephanie and Justin Frieze and great-grandchildren, Thomas and Brittany Frieze of Willard; sister-in-law and husband, Barbara and Guy Harville of Springfield; niece and husband, Michelle and Monty Swearengin of Halfway; nephew, Kevin Harville; and many cousins and lifelong friends. Bob used to love to say, “Keep your hat on so I’ll know ya.” To the best husband, dad, grandpa and friend…we’ll be looking for the best fishing hat in heaven!