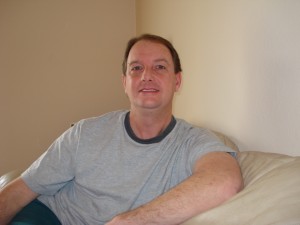 Christopher (Chris) Scott Harris, 44 passed away on January 10, 2015, in Springfield, MO. after a brave battle against cancer.
Chris was born in Springfield, MO and worked as an electrician. He was an avid K.C. Chiefs and Nascar fan. He also enjoyed camping and going to the river. He was preceded in death by his grandparents: Clyde and May Harris, Sylvia Pollard Preston and Jess Pollard. He was also preceded in death by his aunt Susan Jacobs.
He is survived by his parents: Tex Harris & significant other Mary (Fuzzy) Sharp, Joy Harris & significant other Larry Rantz, his daughter, Alesha Harris and his son Tex Harris all of Springfield, MO. Chris is also survived by 2 brothers: Jason & Brooke Martz Harris of Springfield, MO and Ryan & Teri Harris of Nixa, MO. and several nephews, also, survived by his companion of 6 years Amporn Schmidt.
Visitation will be from 6-7 pm on Thursday, January 15, 2015 in Greenlawn Funeral Home South with a memorial service to follow at 7 pm in the funeral home. Chris was a loving father, son, brother and companion. He will be deeply missed, but always remembered and loved.