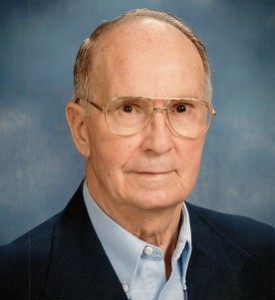 Clarence Everett Minor of Springfield went home to be with the Lord on Saturday, July 9, after a short battle with brain cancer. Clarence was a devout follower of Christ and a longtime member of National Heights Baptist Church, having served as a deacon, building committee chairman, and an enthusiastic volunteer. He also served for many years on the board of Liberty Cemetery. Clarence spent more than 40 years of his life working at Harlin Fruit Company, formerly of Springfield, and was its General Manager when he retired.
Clarence was born on January 10, 1927 in Springfield and graduated from Fair Grove High School. He was married to his cherished wife Ruth for almost 65 years. They have one daughter and three beloved grandchildren.
He was preceded in death by his wife Ruth, his parents, his sister-in-law Helen Ruth and her husband Jim, and brother-in-law Charles Price.
Clarence is survived by his daughter, LeAnn Rowe and her husband, Greg of Round Rock, TX, grandchildren, Stephanie, Justin (and his wife Natalie) and Ashley and great-grandchildren Ashlynn and Lucas, all of TX. He is also survived by his sister Faye Price, of Springfield and his brother, Sam Minor and sister-in-law, Mary of Rogers, AR. Clarence has two nephews, Chris Minor (and wife Karen, their children Lindsey, Kyle and their families) of Rogers, AR and Mike Minor of Kansas City, MO, and his niece, Donna McCullough, great nephew, James McCullough and his son Jimmy of Springfield. Clarence also leaves behind a host of wonderful friends from his church that he enjoyed fellowship with until his last moment on this earth. The family conveys their appreciation to all of them for the joy they gave to him.
Visitation will be held at Greenlawn North Funeral Home, on Wednesday, July 13, from 5:00 p.m. to 7:00 p.m. Funeral services will be held on Thursday, July 14, at 2:00 p.m. at National Heights Baptist Church in Springfield followed by burial at Liberty Cemetery near Fellows Lake in Greene County. In lieu of flowers donations can be made to National Heights Baptist Church. www.nationalheights.org/new/donate