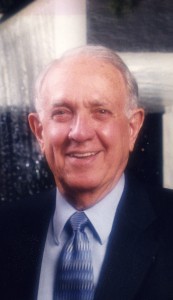 Clay Cantwell, 90, passed away Friday, September 4, 2015, in his home in Branson, Missouri.
A lifelong resident of the Ozarks, Clay was born on January 19, 1925, in Sammy Lane, Missouri, to Jessie Ardella (Curtis) and William “Bill” Cantwell. Clay spent his boyhood on his family’s cattle ranch and dairy farm, and graduated from Branson High School in 1942. He built the first Grade A dairy barn in Taney County. He served his country during World War II in the U.S. Navy aboard the aircraft carrier USS Intrepid in the Pacific Ocean. Following the war, he earned a Bachelor’s Degree in Business Administration from the University of Missouri in Columbia and, in 1954, a Juris Doctor degree from the University of Missouri School of Law. While in law school, Clay met his wife, Jean, and they married in 1952. Clay opened his private law office (currently, Cantwell, Smith & Trokey) in Branson in 1954 and practiced law until his retirement in 2005.
Clay was the first Democrat elected as Taney County Prosecuting Attorney and served from 1957 to 1961. He represented the City of Branson as the City Attorney from 1954 to 1977. In his law practice, he represented many of the individuals, companies, and institutions that made Branson the thriving community it is today.
In addition to his law practice, Clay was a successful real estate developer in the Branson area, subdividing hundreds of acres into residential neighborhoods, including the Cantwell Addition, Taneycomo Acres and Riverside Estates. Along with his partners Jack Justus and Mid Harris, Clay planned, developed and completed one of the first condominium developments in Missouri, called Lakewood Estates.
Clay believed in giving back to his community. He served as president of the Taney County Bar Association from 1978-1979. He served many years on the Skaggs Hospital board of directors. He was president of the Branson-Hollister Rotary Club and president of the Branson Chamber of Commerce. In 1991, Clay and Jean jointly received the Mary Award for service to the community from the Branson/Lakes Area Chamber of Commerce. Clay was an active member of the First Presbyterian Church of Branson, serving as an elder. In 1985, he was appointed by the Governor of Missouri to serve on the Board of Regents of Southwest Missouri State University (now Missouri State University) and served through 1991. Clay was on the first board of the Bonniebrook Historical Society and, in 1966, he purchased the O’Neill homestead land to preserve the legacy of Ozarks artist Rose O’Neill. Clay’s generosity to his community has included not only his time and expertise, but also supporting contributions to such recipients as the First Presbyterian Church, Skaggs Hospital, Boys & Girls Club of the Ozarks, Missouri State University business and music departments, Branson School District, TLC Theatre, and Lives Under Construction Boys Ranch.
Clay’s family and friends knew him as a man of integrity, a true gentleman, honest and fair, and a hard worker, with an engaging sense of humor. He was widely respected among his peers in the legal profession. He was unwavering in his principles. He was the loving and rock-solid foundation of his family. Clay was a man who saw potential all around him and then acted upon it. He loved walking in the Ozarks woods, seeing the potential in the raw land and working to develop it. He saw potential in people, influencing many in the community. Most important, he saw the potential in his family, encouraging and supporting his wife, children and grandchildren to achieve their life goals.
Clay enjoyed traveling all over the world, but his favorite place on earth was the Ozarks.
Clay is survived by his wife, Jean (Barker) Cantwell; his son, Brad Cantwell and wife Debbie, of Springfield, MO; his daughter, Lisa (Cantwell) DeGraaff and husband Bob, of Norwalk, IA; four grandchildren, Justin Cantwell and wife Alice, Courtney (Cantwell) Burns and husband Jeff, Brett (Cantwell) Sirianni and husband Nick, and Robert DeGraaff and wife Page; and three great-grandchildren, Kaylee and Reagan Burns, and Jacob Sirianni. Clay is also survived by two nieces, Cathey Siebenlist and Lana Crum. Clay was preceded in death by his daughter, Sherry Cantwell, and his two sisters, Frankie Cathey and Georgia Wallace.
Visitation will be from 5 to 7 p.m. Wednesday, September 9, 2015, at Greenlawn Funeral Home, 708 State Highway 248, Branson, MO. Funeral services will be at 11 a.m. Thursday, September 10, 2015, at the First Presbyterian Church of Branson, 420 West Main, Branson, MO. Burial will follow at Ozarks Memorial Park Cemetery in Branson, after which, all friends and family are invited to a luncheon at the First Presbyterian Church fellowship hall.
In lieu of flowers, memorial contributions may be made to the First Presbyterian Church of Branson, 420 West Main, Branson, MO 65616, or to the Bonniebrook Homestead and Museum, 485 Rose O’Neill Rd., Walnut Shade, MO 65771.