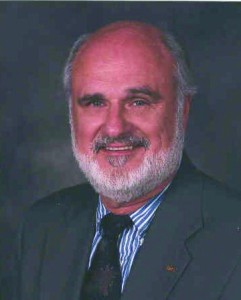 Curtis W. “Curt” Brown, 80 of Springfield, passed away on Wednesday, August 19 in his home. He was born in Columbia, Missouri on December 26, 1934. He was the only child of Elvin and Margaret (Lanham) Brown.
He was a graduate of Hickman High School in Columbia, Missouri. In high school and college he played the drums in dance and jazz bands to work his way through college. He served in the US Army in the mid 50s with the 101st Airborne Division Public Information Office as well as the 101st Division Band. He attended University of Missouri and was in the Marching Mizzou Band.
Curt was a lifelong radio broadcaster, starting in 1955. In 1969 he joined KTTS as General Manager and remained in that position until he retired in 1999. In 2012, he was inducted into the Missouri Broadcasters Hall of Fame. He served as President of the Missouri Broadcasters Association, President and founding member of the Springfield Ad Club. He served on the National Association of Broadcasters Board, the Associated Press Broadcasters Board, and Country Radio Broadcasters Board. He served on numerous local boards and was active in the Springfield Chamber of Commerce and Southeast Rotary. He volunteered weekly at Mercy Hospital. In the 60s he was named “Boss of the Year” by a local women’s group for hiring the first woman DJ, newsperson, and sales representative.
During his 31 years at KTTS, he was honored as General Manager of Year by Radio and Records Magazine and General Manger of Year and Distinguished Broadcaster by the Missouri Broadcasters Association. Under his leadership, KTTS won the Marconi Award for Radio Station of the Year in 2000. Curt was well known for his award-winning editorials, something he continued until his passing.
Curt had a positive impact on so many lives in his personal and professional life. He lived by his favorite saying, “Make Today Count”. He was an avid sailor and found great pleasure on the lake.
Curt is preceded in death by his parents and first wife, Janice Wood Brown.
He is survived by his wife, Decema “Dee” Brown of Springfield; son, Steve Brown and wife Patti; daughter Julie Jones and husband Rodney; grandchildren Nathan, Hannah and Nicole; step-children, Jeff Wagner, Kevin Wagner, Sheryl Stevens; six step-grand children and seven step-great grand children.
In lieu of flowers, memorial donations can be made to the American Diabetes Association, 2833B East Battlefield, Suite 100, Springfield, MO 65804 or Missouri State University Foundation, Curt Brown Memorial Media Scholarship, 901 S. National, Springfield, Missouri 65897.
Funeral Services will be held at Ridgecrest Baptist Church, 2210 W. Republic Road, Springfield, Missouri on Monday, August 24 at 10 a.m. Visitation will be held Sunday at Greenlawn East, 3540 E. Seminole, Springfield, Missouri from 2 p.m. until 5 p.m.