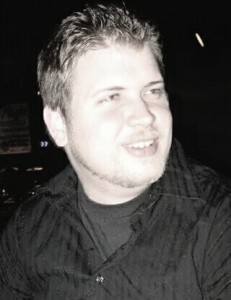 Daniel James Richardson, age 31, of Willard, MO, passed away Wednesday, December 23, 2015 in Springfield. He was born August 28, 1984, in Ft. Worth, TX, to Dennis and Linda (Kennedy) Richardson. Daniel loved writing and playing music, collecting and maintaining aquarium fish, and video games. He spent countless hours attempting to save the world from various fictitious villains. He had a strong faith in the Lord.
Daniel was preceded in death by his father Dennis Keith Richardson and his sister; Denise Lynn Richardson. He is survived by his wife Samantha (Hunt) Richardson, his mother; Linda Carol (Kennedy) Richardson his siblings; David Richardson, Lori and Cory Artz, Derek and Amanda Richardson, Michael Richardson, and Sarah and Brandon Johnson. He is also survived by his mother and father-in-law; Jerry and Diane Hunt. Daniel will also be missed by his grand-mothers; Alfredia Kennedy and Thelma Lee Richardson, his nieces and nephews, and other special friends and relatives.
Funeral services will be held at 3:00 p.m., Tuesday, December 29, 2015, at Greenlawn Funeral Home North, Springfield, MO with Chaplain Derek Henson officiating. Burial will be held in Greenlawn Memorial Gardens, Springfield, MO. Visitation will be held from 2:00 to 3:00 p.m. on Tuesday, before services at Greenlawn Funeral Home North. Memorial contributions may be made to the American Cancer Society . Services have been entrusted to Greenlawn Funeral Home North, Springfield, MO. Online condolences may be made at www.greenlawnfuneralhome.com.