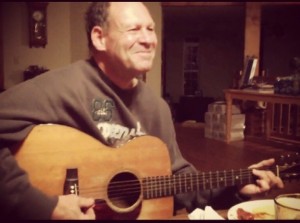 Daniel Owen Sare, age 55, of Walnut Grove, MO, passed away Wednesday, October 21, 2015 in his home. He was born May 6, 1960, in Springfield, MO, to Ted and Vernetta (Winn) Sare. He was a member of the Ebenezer United Methodist Church. Daniel worked in the Quarry-Asphalt business for 37 years. He loved the outdoors, cattle farming, native grasses and flowers, guns and ammo, clogging, playing guitar, traveling to Colorado and family gatherings.
He was preceded in death by his father, Ted Sare; paternal grandparents, Clarence and Audrey Sare; maternal grandparents, Raymond and Arlene Winn; and his uncle Myron (Red) Winn. He is survived by his wife, Teresa Sare; his mother, Vernetta (Winn) Sare, Willard, MO; his children, Brooke Reed, and husband Alex, Independence, MO; Austin Arnall, and his wife Tonya, Fair Grove, MO; and two grandchildren, Dekota and Kadence Arnall; one sister, Gail Sare, and her husband Duane Sherman, Willard, MO; and two nieces, Jenny and Callie Sare.
Funeral services will be held at 3:00 p.m., Saturday, October 24, 2015, at Greenlawn Funeral Home North, Springfield, MO with Rev. Edgar Reed officiating. Burial will be held in Robberson Prairie Cemetery. Visitation will be held from 6:00 to 8:00 p.m. on Friday, October 23, 2015 at Greenlawn Funeral Home North. Memorial contributions may be made to The Cancer Treatment Center of America, 2520 Elisha Avenue, Zion, Illinois 60099. Services have been entrusted to Greenlawn Funeral Home North, Springfield, MO. Online condolences may be made at www.greenlawnfuneralhome.com.