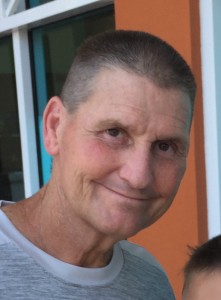 Daniel “Danny” Ray Stallings passed away on September 10th, 2015, at his home in Fair Grove, MO., after a heroic battle with pancreatic cancer. He was born on November 29, 1964 in Independence, Missouri. Danny resided in Moore, Oklahoma; St. Petersburg, Florida; and most recently Fair Grove, Missouri.
Danny had several hobbies such as fishing, hunting, cooking, peddling fruits and vegetables, watching college football, and taking in movies. Despite his many hobbies and activities his true passion was his family and friends. Danny loved nothing in this world more than fellowship with his family and friends. He was a dedicated and loving husband to his wife Christy of 24 years, and also a loving and supportive father to Nickole, Shay, and Zayne, staying active in their lives and numerous activities. Danny was “uncle D” to a host of nieces and nephews, and was routinely described as “my favorite uncle” and “best uncle ever.” He had a multitude of friends that stretched from California to Florida. Danny was a dedicated friend who never lost contact regardless of how far away you were. His extended family was equally important to him, and Danny maintained contact with all of his aunts, uncles, and cousins both near and far. He loved a good family reunion and could sit for hours looking at old pictures and reminiscing about the days of old.
Danny had a heart of gold and has been described as the “most giving person I’ve ever seen.” It was routine for neighbors to find bags of fruit on their front porch, nieces and nephews to find a bag of candy on the table, or a son to find a new a toy waiting when he arrived home. Danny had the unique ability to make friends. It only took one meeting for him to consider you a friend and secure a cell phone number. If you were lucky enough to cross paths with Danny Stallings you were certain to be blessed by his funny and charismatic personality. Danny loved life, he loved his family, he loved his friends, and he loved his church. He had the innate ability to brighten the day of those he came in contact with. He was gifted with the ability to make people laugh and to make people feel better about themselves. If you knew Danny then you knew that the world was a better place, because he existed in it. Danny left a legacy of love and laughter on his family, friends, and community.
Danny is preceded in death by his mother, Mary Lou Stallings, his brother-in-law, Jerry Wayne Lohr, his son, Christian “Shay” Daniel Stallings and his father-in-law, Jerry Miah Lohr, Jr. He is survived by his wife Christy Stallings, his daughter Nickole Hanna of Tampa, FL, his son Zayne Stallings, his father Donald Lee Stallings of Fair Grove, MO, mother-in-law Karen Lohr of Moore, Ok, brother Randy Stallings and wife Brenda of Yukon, Ok, sister Carol Selvidge and husband Lloyd of Del City, Ok, sister Cheryl Eldridge and husband Bob of Midwest City, Ok, brother Chris Stallings and wife Kelly of Fair Grove, MO, sister-in-law Sandi Jones and husband Johnny of Moore, Ok. Danny is also survived by countless nieces, nephews, uncles, aunts, cousins, and dear friends that he truly considered family.
Funeral services will be held 11:00 a.m. Monday, September 14, 2015 at Greenlawn Funeral Home East. Burial will be at Greenlawn Memorial Gardens following the service. Visitation will be Sunday, September 13, 2015 from 6:00 – 8:00 p.m. at the funeral home.