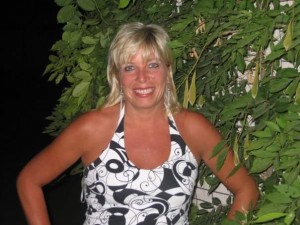 Darla Ristine (Tieszen) Elwood, passed away on November 21, 2015 in Chanute, Kansas. She was born May 17, 1964 in Sioux Falls, SD. to Dennis and Darlene Poppenga
Darla grew up in Parker, South Dakota. She graduated from Parker High School in 1982. After high school, she attended Stewart School Of Hair Styling in Sioux Falls, SD. where she received her license.
Darla married Kevin in 2013, in Chanute, KS. they were happily married and Darla enjoyed her time with her husband and her family. They also enjoyed working on their home, relaxing in their hot tub and traveling together. She loved music and dancing. They anticipated growing old together and retiring on the beach.
Darla was preceded in death by her father Dennis Poppenga, both sets of her grandparents, her special aunt, Dorothy. Darla is survived by her husband Kevin, of Chanute, KS, her sons: Dustin Tieszen and Derek Tieszen, both of Springfield, MO. her brothers: Daniel of Tea, SD. and David, of Springfield, MO. her sister: Denita and Michael Maughan, of Bakersfield, CA, and her mother: Darlene Poppenga of Tea SD. her father and mother-in-law; Elvin and Vickey Elwood, of Ozark,MO. her brother and sister-in-law: John and Ann Custer, of Ozark, MO. several nieces and nephews, and a host of family and friends.
Memorial services will be held at 1:00 p.m. Friday, November 27, 2015, in Greenlawn Funeral Home North, 3506 North National, Springfield, MO.