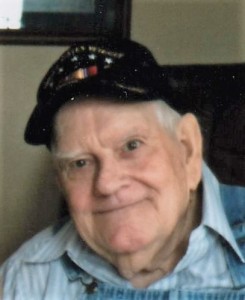 Darrell Wayne Brake was born to Ernest and Beulah Brake on July 24, 1927, in Glenwood, Iowa. Darrell died Saturday, March 5, in the Brookhaven Nursing and Residential Center.
Growing up in Glenwood, Darrell was the fourth child of nine. On September 11, 1945, Darrell joined the U.S. Air Force. On May 10, 1948, Darrell was discharged.
On December 23, 1948, Darrell married Peggy Jo Phillips in Dogwood, Missouri. Darrell and “his Peggy” began their life there in Douglas County, where they accepted Jesus Christ as their Lord and Savior at the Red Bank Baptist Church. Peggy died in October 2015. They were married for 67 years.
Together, Darrell and Peggy had two daughters, Dixie and Judith. Later on, they moved their family to Springfield.
During Darrell’s life, he worked as a deacon, helping to build several churches and doing anything else needed. Along with his family, his love for church was the focus of his life.
Most of his life, however, Darrell worked in refrigeration. He worked at Coca Cola in Springfield for over 15 years, spending many of those years as a service manager. Afterward, he moved on to work for Dr. Pepper for five years before retiring at 55.
Darrell was known for speaking his mind and keeping his promises. He was a very wise counselor to his children, grandchildren and great-grandchildren. By his example, he taught his family work ethic, honesty and love. He kept them in line with one, stern look, but a smile and a hug gave them courage and hope through the hardest times.
Darrell could easily be found outside tinkering with or riding his tractor or hanging out with his dog and the cattle.
Darrell was preceded in death by his wife, Peggy, his parents, Ernest and Beulah Brake; brothers, Harvey, Norman, Eldon and Ernest Jr.; and sisters, Ruth Balentine and Carolyn Hudson. He is survived by two sisters; Geneva Ellison and Patty Ragsdale; two daughters, Dixie Louise Robinson and Judith Ann Brake, with husband, Mark Koenemann; grandchildren, Angel Moore, with husband, Ronnie, Richard and Andrew Robinson, Matthew Browning and Kassidy Koenemann; and lastly, four great-granddaughters, Sydni, Tiffani, Sophi, and Alaya, in addition to many nieces, nephews and cousins.
His family loved and adored him and made sure that he knew that every day.
Darrell’s visitation will be held on Wednesday, March 9, at Greenlawn Funeral Home North from 6-8 pm. His funeral service, also at Greenlawn, is scheduled for Thursday, March 10, at 10 am with internment at White Chapel Cemetery following immediately after. In lieu of flowers, donations may be made to Rare Breed Youth Services in Springfield, Missouri.