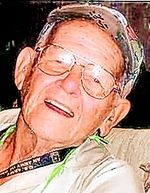 David Floyd Campbell, 88, of Springfield, passed away October 4, 2009, in Missouri Veterans Home, Mt. Vernon, Mo. Services will be at 11 a.m. October 8, in Greenlawn Funeral Home South. Visitation will be from 6:30 to 8 p.m. October 7, in the funeral home. Burial will be in Springfield National Cemetery. David was born December 7, 1920, in St. Louis, Mo., to Schaffner C. and Lavinia McClay Campbell. He served in the Army during World War II. David owned and operated Certified Home Improvement Corp. in St. Louis before his retirement. He moved to Springfield where he ran Great Western Paint and was a licensed broker. He enjoyed his hobbies of fishing, boating and hunting. He also had a home in Branson. David was a Master Gardener and belonged to the Moolah Shriners. David was preceded in death by his parents; his wife of 50 years, Ceola; four brothers and six sisters. Survivors include four daughters, Deanna Pearlstein of Amherst, Mass., Donna Chancellor and Marsha Herin, both of Columbia, Mo., and Robin Van Huis of Springfield; nine grandchildren; and 17 great-grandchildren. In lieu of flowers, contributions are suggested to Missouri Veterans Home, 1600 S. Hickory, Mt. Vernon, MO 65712.