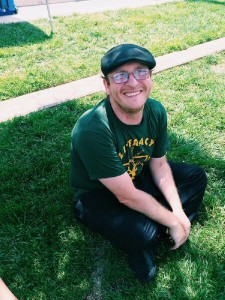 David John “Blind Dave” Newman, of Springfield MO, died Sunday, December 7, 2014 after a long, hard struggle with a debilitating illness: Addiction. He was 36 years old.
The first born child of his mother, Marjorie (Marji) and step-father, Randy D. Hughes, David entered this world on October 29, 1978 at St. John’s Hospital in Springfield MO
Born with fully mature cataracts on both eyes, David never let his visual impairment be an obstacle. He was always adventurous, always curious, always quick with a joke, always full of compassion for others. As he grew older, he faced some dark, hard times in his life and he, like so many of us, he made some poor choices, leading to his ongoing struggle to be free of addiction.
For three years prior to his death, David was in recovery, working hard to make up for lost time. He was a full time student, studying Anthropology – making straight A’s and looking forward to continuing his education in pursuit of a college level teaching career. He was in a relationship with a woman he adored and working hard to be the man she needed him to be. After so many periods where he would disappear for weeks at a time, he called his mother almost daily (as all good sons should). His parents were finally hearing those things they had tried so hard to teach him as a child coming from his lips as a man. But somehow, someway – the pull of that horrid, evil, illness was too strong for him.
He relapsed in his recovery about two months ago, unable to cope with depression and the stressors that came with the life he was pursuing. But no amount would ever be enough to recapture that never-to-be-caught-again feeling – a fact he knew so well. Yet this is the insanity of addiction: He still kept trying – larger & larger – higher & higher doses until it did what it always does. It took his life & crushed all those who love him.
David was the epitome of “larger than life” – his story would literally fill volumes. As his friend, Felice, said, “some people live for 100 years and never truly have LIVED the way he did in his short time here .” The quintessential “road dog,” he loved adventure, new experiences – he loved people. So often, he would let go of his own struggles to take up the burden of others. He was generous in a way that so many are not, literally giving the shirt off his back, the shoes from his feet or sharing the first meal he had eaten in days, time and time again.
He was a talented musician and vocalist with a deep love for music. He was a master story-teller with the gift of bring light and laughter to dark times and places, as well as the uncanny ability to take the most boring, mundane subject and turn it into a tale that excited and enthralled those who were listening. Always the student, always the teacher, he was an intent listener and deep thinker who wanted to hear what others had to say, wanted to hear their hearts – to challenge their thoughts. He was the first one there to offer help and his heart ached that there were so many he was powerless to lift up. He loved deeply, strongly and passionately. Kind, sympathetic, empathetic – more than a son, a brother, a grandson, nephew, more than a friend – yet language fails to truly describe who he was. He was his mother’s “Sunshine” and there may never be that kind of light again.
David is survived by his mother and step-father, Marjorie and Randy Hughes his brother and sister-in-law, Tim and Davean Sowards, his grandmother, Myra McFarland, his partner and love of his life, Whitney Dennis, his constant companion and fellow traveler, Odin, many aunts, uncles, cousins and countless friends.
A memorial will be held Saturday, December 13, 2014 from 1:30 to 4:30 at Doling Park Family Center in Springfield. In lieu of flowers, donations may be made to Memorial Fund: Helping Odin at gofundme.com to help provide for necessary surgery and ongoing care for his beloved companion.