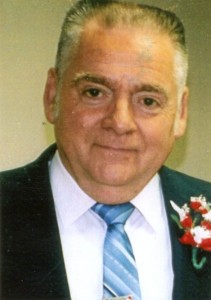 David O. “Sam” Upchurch, 81, passed away Saturday, August 15, 2015 in Springfield, Missouri. Sam was born September 29, 1933 in Strafford, Missouri to Eldridge and Mary Upchurch. He graduated from Central High School, Class of 1951. He worked for the Springfield News Leader and retired in 1980. Sam married Eleanor R. Crowell on June 13, 1964 at Silver Dollar City, Branson, Missouri. He was a devoted Jehovah’s Witness and spent much of his time helping others and learning about the bible. Sam also enjoyed fishing, stock car racing, and camping.
Sam was preceded in death by his parents, Eldridge and Mary; three sisters, Katherine Wallace, Hazel Marks, and Dixie Young; two brothers, Marvin and Eldridge Jr.; a nephew, Randy Kiser; and a niece, Judy Young.
He is survived by his wife, Eleanor; his children, Daphne Upchurch, Chris and wife Denise Upchurch, and Keith Upchurch; his grandchildren, Christine Rogowsky, Madison and Sadie Upchurch, Brinkley Upchurch, and Brandon and Shelby Morley; his sister, Betty Kiser, five nieces, and one nephew.
A memorial service will be held Saturday, August 22, 2015 at 11:00 a.m. in Greenlawn Funeral Home South.