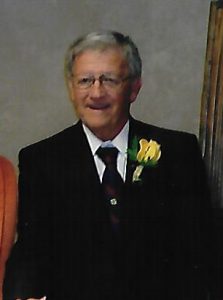 Mr. David R. Davis, Jr., age 79, of Bolivar, MO, passed away Wednesday, July 20, 2016 at Mercy Hospital in Springfield, MO. He was born January 3, 1937 to David R. and Aline B. (Painter) Davis. He was united in marriage August 29, 1958, to Phyllis Marie Pursley and to this union two daughters were born. He was a truck driver for nearly 60 years, starting when he was 21 years of age, and was a member of First Assembly of God Church, Bolivar.
David is preceded in death by his parents, and his wife, Phyllis.
He is survived by two daughters: Sharon and her husband Gary Coon of Nixa, MO, and Vickie and her husband Danny Ross of Bolivar, MO; three grandchildren: Julie Fish-Reynolds and her husband Ray of Arlington, TX, Lacey Allison and her husband Spencer of Bolivar, MO, and Colby Ross of Bolivar, MO; four great grandchildren: Nicholas Flack, and Hailey Reynolds both of Arlington, TX and Oakley Rhae and Huntley Mae Allison of Bolivar, MO; one sister, Patty Sikes of Bolivar; two brothers: Gene Davis and wife Irene of Bolivar and James Otis (Jimmy) Davis and wife Marilyn of Polk, MO; and a host of nieces, nephews, other relatives and friends.
Funeral services will be held at 11:00 AM, Monday, July 25, 2016, at Pitts Chapel, Bolivar with Pastor Randy Urich officiating. Visitation will be held Sunday, July 24, 2016 from 4:00 – 6:00 PM in the funeral home. Friends and family may sign a guest book or send private condolences at www.greenlawnfuneralhome.com. Memorial contributions may be made to the American Kidney Fund.
Arrangements have been entrusted to Pitts Chapel Bolivar, MO.