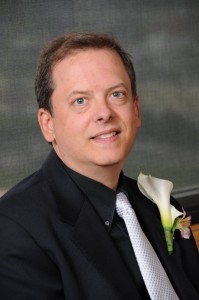 David Stamps was born December 7, 1962. He lost his long fight with liver disease on Sunday October 18th, 2015 at the age of 52.
David always knew what hard work was. Beginning in the 5th grade he started delivering newspapers throughout the hills of Harrison, Arkansas. In the summer of 1974 David was baptized as one of Jehovah’s Witnesses at age 11. At age 15 he started working at the local grocery store and stayed there until he meet his one true love. David and Lavon were married April 16, 1983. David and Lavon were never apart and shared a marriage together that was always filled with love and care for each other.
David had two children who he loved and cared for with his whole heart. The best gift that he ever gave his children was the love and knowledge about their Heavenly Father Jehovah God. He instilled in them morals and love to tell others about Jehovah. The best way that he did that was by his example. David loved to talk about Jehovah. No matter where he was or how sick he got he tried to tell others of the wonderful hope and the promises that we have all been given.
David served as an Elder in his local congregation and he devoted many hours each month looking for people who would like to learn more about the bible. But there was nothing that he loved more then helping his “brothers and sisters” all over the world. In 1988 David started working at Audio Acoustics where he worked for 27 years. He loved this job and always considered it a privilege to work with volunteers by helping them obtain high quality, professional sound and video systems to support the Bible educational work of Jehovah’s Witnesses. His customers were not just merely those he worked with, ordered equipment for, or helped on the phone, but rather they were close dear friends and he treasured their friendship deeply.
David was preceded in death by his father Robert Allen Stamps.
David is survived by his wife of 32 years, LaVon (Allen) Stamps and two children, Courtni Seair (Stamps) Satterlee of Springfield MO, Andrew Hayden Stamps of Beijing, China, and one grandchild Miles Satterlee.
He was also survived by his mother, Evelyn Stamps of Springfield; one brother, Robert Allen Stamps also of Springfield, and one sister Melissa Jo (Stamps) Bruschi of Willard MO.
Services for David will be at 2:00 P.M. Saturday, October 24, 2015 at Greenlawn Funeral Home East 3540 East Seminole Springfield, MO. Visitation will be from 6:00 to 8:00 P.M. Friday, October 23, 2015 in the funeral home.