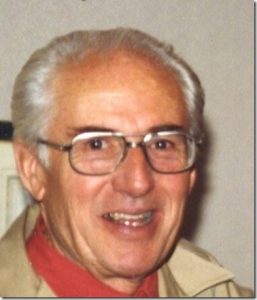 Dean Alvin Lipe, 89, Springfield, MO is Tap Dancing in Heaven!
He went home to be with his Lord and Savior July 18, 2016. Dean was a true Gentleman and a loving but strong gentle man.
Dean was born April 13, 1927 to Ray E. and Adeline N. (Sutherland) Lipe in San Francisco, CA. He attended public schools in Oakland and Berkeley, CA. Graduating from high school in 1945, he joined the United States Army.
He was a Sergeant in the 88th Blue Devils Infantry Division with the Army of Occupation in Trieste, Italy. After receiving his honorable discharge in 1948 he received his Masters Degree in Business Administration while attending college in Berkeley.
Dean worked in Savings and Loans for many years in the San Francisco Bay area. Moving to Springfield in 1972 with his family, he worked for Bell Savings and Loan. He was their Chief Executive Officer in 1983 when he made a career change and began his own successful remodeling business. He took his hobby of working with his hand and created for himself a business where he could help and solve problems for his customers one on one. On his Seventieth birthday, Dean began tap dancing lessons and had a wonderful five years learning something he had wanted to do all of his life.
In 2002 Dean retired from his remodeling career and his tap dancing due to an aortic dissection, triple by-pass and brain surgery all within a twenty-two month period. Dean became known as a MIRACLE MAN because he survived all of them and became a volunteer at St. John’s Hospital encouraging patients. Most of his strength returned thanks to working out at Hammond’s Heart Center three days a week.
Dean is survived by Riki his beloved wife of sixty one years, his son Steven Lipe, two grandchildren, Stephanie and Spencer, and their mother Terri of Bolivar, MO, his sisters-in-law, Carol Lipe and Marceia Ljubojevich of the state of California, and Shirley Borgstadt of Springfield, MO and many nieces and nephews.
Services will be held at 11:00 AM Friday, July 22, 2016 at Greenlawn Funeral Home East, Springfield, MO with Chaplain Terry Watkins officiating with full Military Honors.
The family will receive friends from 10:00-11:00 AM prior to the service.
Memorial Contributions may be made to the Humane Society.