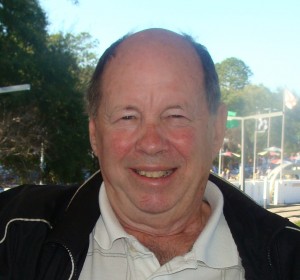 Dennis Lynn Peck, Sr., 73, died Friday, February 26, 2016 at Mercy Hospital in Springfield from a post-stroke illness. He leaves his cherished wife of 51 years, Dixie (Johnson) Peck; four children, Dennis Peck, Jr., Darice Kimball, Danielle Horton, and Dara Peck; nine grandchildren; six great grandchildren; his mother, Dorothy (Butler) Peck of Joplin; a brother, four sisters, 32 nieces and nephews, and many more family and friends. He was preceded in death by his father, Wallace Townes Peck.
Born and raised in Tulsa, the son of Wallace Townes (W.T.) and Dorothy (Butler) Peck, he moved to Joplin in his teens. There he joined the Church of Jesus Christ of Latter-day Saints, and met a beautiful, blue-eyed farm girl named Dixie Johnson. He remained devoted to both for the rest of his life. In his early years, he delivered pies for his family’s bakery. Then after graduating from Joplin High School, he served a two-year church mission in London, England. He returned home in December of 1964, and asked Dixie to marry him. She said she wanted to wait…until after the holidays, so they were married on January 2, 1965 in Joplin, Missouri.
Their early married life was spent traveling from sales job to sales job, as their children began to join the family caravan. The family eventually settled in Kansas City, Missouri, where Dennis worked as a sales representative for American Textile Mills. In 1987, the family moved south to Springfield, where Dennis started his own business, one he ran (with his wife by his side) until his passing.
A beloved father and grandfather, Dennis cherished the time he spent with his grandchildren and great grandchildren. At any family gathering, he could always be found chasing around and playing with his adored young brood. Up until his passing, the widest smile and heartiest laugh would come from the antics of his three young grandsons, to whom he was a surrogate father after the loss of their own dad in 2003.
A visitation will be held from 6 p.m.-8 p.m. on Thursday, March 3, 2016 at the Church of Jesus Christ of Latter-day Saints at 320 W Jackson St, in Willard, Missouri. The funeral will be at 11 a.m. on Friday, March 4 at the Church of Jesus Christ of Latter-day Saints at 2107 Indiana Ave. in Joplin, Missouri. A graveside service will follow in Diamond, Missouri.
The family has suggested that donations may be made to help with burial costs.