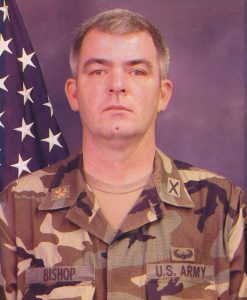 “Major Don” Bishop was born on April 16, 1960, in Des Moines, Iowa. He was promoted to God’s Army on October 3, 2016, having lost his battle with coronary artery disease. Don grew up in central Iowa , graduating from Norwalk High School in 1978. During his High School career, he achieved a total of 12 varsity letters in football, basketball, golf, and baseball.
Don married his wife Elise (nee Tamisiea), on August 2, 1980 at her parents’ home on Lake Okoboji in Iowa. He was commissioned as a second lieutenant while a junior in college under the Early Commissioning Program. After graduating from Sam Houston State University in Huntsville, Texas with a Bachelor’s degree in Law Enforcement/Police Science, Don attended Officer Basic Camp at Fort Sill, Oklahoma. He spent the next twenty years on active duty as a Regular Army Field Officer.
Don was first stationed in Neu Ulm, West Germany, as a Pershing Missile Platoon Leader. His son, Beau, was born there in 1986. Following his time in Germany, Don went on to attend the Officer Advanced Course at Ft. Sill and later held various command and staff positions with the 101st Airborne Division (Air Assault) at Fort Campbell, Kentucky. His daughter, Leigh, was born in neighboring Clarksville, Tennessee, in 1988.
Don was subsequently assigned as an Assistant Professor of Military Science at Oregon State University/Western Oregon University, and then the Combat Arms Division Chief working with the Guard and Reserves in the Twin Cities, Minnesota. Following this he coordinated Joint-Level Exercise Simulations Requirements for the Army at Fort Leavenworth, Kansas. Finally, he served as the Team Chief directly advising an Arkansas National Guard Light Artillery Battalion on the 39th Infantry Brigade in Russelville, Arkansas. He officially retired from the Army on December 1, 2002, and lived in his home on Table Rock Lake for the remainder of his life.
After surviving cancer (1994), the amputation of his left leg (2003), and kidney cancer (2004), Don made it his mission in life to remind everyone to take time to have fun and appreciate what they have because each day is precious. Shortly after his retirement, Don and his wife founded Major Don’s Army, a 501(c)(3) public charity that offers vacations from cancer for children and their families. The Foundation provides trips to the Branson/Table Rock Lake area, complete with travel money, lodging, food, and tickets to area attractions. At the time of his death, Major Don and his army had given Ozarks getaways to 208 sick children and their families. in 2013, Don was recognized by the American Red Cross with an Everyday Hero award for his work with Major Don’s Army. The following year he was a contender for a NASCAR Betty Jane France Humanitarian Award.
Don is survived by his wife, two children, sister Diana Pauley of Stuart Iowa, and mother Caroline Bishop of West Des Moines, Iowa. He was preceded in death by his father, Lynn D. Bishop of Norwalk, Iowa.