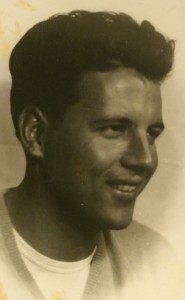 Donald Kenneth Robbins, 84, passed away Tuesday, March 31, 2015 in Springfield, MO. at his daughter’s home with his family by his side. Don was born July 10, 1930 in Neosho, MO to H.K. (Bus) Robbins and Millie (Peters) Robbins. He was the oldest of five siblings, and the only boy. He graduated High School in 1950 at Baxter Springs, KS. He excelled in sports where he earned 10 varsity letters in football, track and basketball. After graduating, he served his country aboard the USS Consolation and USS Haven as a Navy Corpsman during the Korean War. After his honorable discharge from the service he returned home where he was employed by B.F. Goodrich Tire and Rubber Corp. in Miami (OK) as a lab technician. Don also earned an Associate’s in Arts Degree from Northeastern Oklahoma A&M in Miami, OK in 1958. While working at the plant he met the love of his life, Ardys Maurine Wolfe, and they were married on June 7, 1955. They were blessed with three children, Rance, Robyn, and Regina. Upon his retirement in 1986, after over 30 years with B.F Goodrich, Don and Ardys moved to Bernice, OK on the shores of Grand Lake where he enjoyed fishing, hunting, and working in his yard. Don was also an accomplished wood carver and a gifted artist. He enjoyed spending time with family and friends.
He was preceded in death by his parents. He is survived by his wife of nearly 60 years, Ardys; three children and their spouses, Donald Rance and Nancy Robbins of Jay, OK, Robyn Lyn and Brad Mitchell of Miami, OK, Regina and Paul Williams of Springfield, MO.; grandchildren, Mandy Calliahan, Matt Mitchell, Kade Robbins, Chris Mitchell, Clay Robbins, Katelyn Williams, Rachel Williams and Matthew Williams and 10 great grandchildren; his sisters, Shirley Bro of Fairland, OK, Chloe Ann Kline of Miami, OK, Vickie Lynne Williams of Joplin, MO, and Dee Dee Fowler of Adair, OK.
Funeral Services will be held at 11:30 AM, Monday, April 6 at Greenlawn Funeral Home East, 3540 E. Seminole
Springfield, Missouri 65809. Immediately following the Interment will be at Missouri Veterans Cemetery Springfield, MO.
In lieu of flowers, donations may be made to American Cancer Society, PO Box 22718 Oklahoma City, Oklahoma, 73123-1718