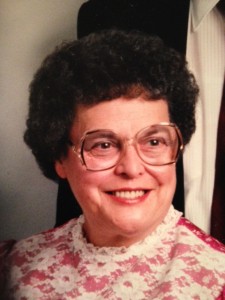 Dorothy Lake was taken into the arms of her loving Savior at the age of 90 years old on December 30, 2014. She was born on September 5, 1924 in Moline, IL. to Julien Dupont and Anna (Eaton) Dupont. She married Kenneth Lake on October 17, 1942 and he preceded her in death in 2009 after 67 years of marriage
She was preceded in death by her parents, husband, a brother: Julian Dupont, two great-grandchildren: Justin Siefker, and Anthony Lake.
Dorothy is survived by her children: Carol and Kent Siefker, Kenneth and Teresa Lake Jr., and Shirley O’Connor, twelve grandchildren, and thirty-six great-grandchildren.
Visitation will be on Friday, January 2, 2015 from 10 AM until service time at 11 AM at Berean Baptist Church.
Burial will take place at 1 PM at Missouri Veteran Cemetery.
In lieu of flowers, the family has requested donations to be made to the Berean Baptist Church Missions Department.