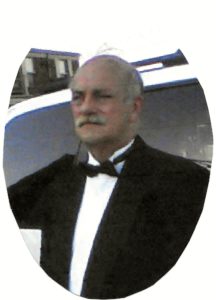 Doyle Dawson Miller, after a yearlong bout with cancer, passed away on June 1, 2020 at his home in Branson, Mo. at the age of 66 years.
He was born on December 14, 1953 in Russell, Kansas, the son of Maxwell S. and Vivian Dawson Miller. He graduated from Russell High School and Ft. Hays State University with a Bachelor’s Degree in Music Education. His early career started with law enforcement including the WaKeeney, KS Police Department. Eventually, retiring from law enforcement, he turned professional to his love of music. Throughout his career Doyle performed with musical groups such as Les Brown and the Band of Renown; Tommy Dorsey Orchestra; Harry James Orchestra; Les Elgart Orchestra; Sammy Kaye Orchestra; Russ Morgan Orchestra and Bobby Vinton with the Glenn Miller Orchestra. He was a member of the Hays Masonic Lodge #195.
Eventually moving to Branson in 2004, Doyle played in many theaters and shows including The All Hands On Deck! Show; Silver Dollar City – Worldfest; The Rat Pack – A Tribute to Frank, Dean & Sammy; Les Brown and The Band Of Renown; The Rat Pack Is Back! (From Las Vegas); Branson Jubilee; The Magnificent Seven and Swing, Swing, Swing. He has also worked or recorded with celebrities such as Bob Hope; Andy Williams; The Lettermen; Shirley Jones; Marie Osmond; Jimmy Osmond; Merrill Osmond; Mannheim Steamroller; Little Anthony and The Imperials; John Davidson; Jack Jones; Lee Greenwood; The Lennon Sisters; Jan Daley; Gloria Loring; Fred Travalena and the St. Louis Jazz Orchestra. Prior to moving to Branson, Doyle worked for Carnival Cruise Line and Royal Caribbean Cruise Line playing lead trumpet in their show bands touring around the world.
Doyle is survived by his three children, Max, and wife Angela, Hays, KS; Joe, and wife Sheila, Marana, AZ; and daughter Cathie Thon and husband Ryan, Lawrence, KS. His fiancée, Betty Smith, Branson, MO, and siblings Gwen Johnson, Hays, KS; Tim & Linda Miller, Hays, KS; and sister Emilie Miller, Chicago. Four grandchildren, Lucas, Corbin, Meredith and Madeleine. Brother-in-law, Dwayne Kunzler, St. Joseph, MO. He is also survived by nieces, nephews and cousins. He was preceded in death by parents and his sister Marilyn (Kunzler) Miller.
A Celebration of Life service for Doyle will be held at a later date in Russell, Kansas.