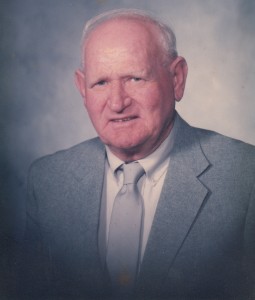 Duane W. Harmon, age 85, of Rogersville, MO, passed away Wednesday, October 7, 2015 in his home surrounded by his family. He was born January 9, 1930, in Depue, IL, to Estel and Winnie Harmon, Sr. Duane was united in marriage to Maggie Jane Cooper on December 26, 1952 in Eureka Springs, AR. He worked as a supervisor for Positronic Industries, he was the very first employee hired. He retired in 1994 after twenty-six years of service. Duane enjoyed gardening, raising cattle, and football, he was a Kansas City Chiefs and St; Louis Rams fan. His greatest love was spending time with his family. Duane was the best dad and grandpa. He will be deeply missed by his family.
He was preceded in death by his loving wife,Maggie Jane Harmon; parents, Estel Ray and Winnie Harmon, Sr.; one son, Michael Harmon; one brother; and four sisters. He is survived by his five children, Beverly Knight, Fordland, MO, Deborah Harmon, Rogersville, MO, Vicki Criger and husband Paul, Springfield, MO, David Harmon and Crystal Allen, Rogersville, MO, and Darla Harmon, Springfield, MO; three grandchildren, Andrew and wife Tammy, Val, and Laci; three great-grandchildren, Sean, Brianna, and Chris; two brothers, Henry Harmon, Lebanon and Harold Lee Harmon, Napa, CA; and a host of family and friends.
Funeral services will be held at 1:00 p.m., Saturday, October 10, 2015, at Greenlawn Funeral Home East, Springfield, MO with Chaplain Larry Cooper officiating. Burial will be held in Panther Valley Cemetery, Rogersville, MO. Visitation will be held from 6-8 p.m. on Friday, October 9, 2015 at Greenlawn Funeral Home East. Services have been entrusted to Greenlawn Funeral Home North, Springfield, MO.