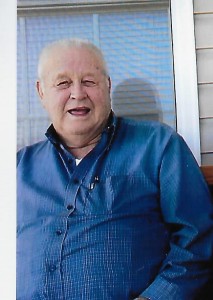 Eldon Lee Means was born January 9, 1935, at Dadeville, MO, the son of Verne C. Means and Ina M. Chism Means. He departed this life at home in Fair Play on January 15, 2016, with his wife Dixie by his side.
Eldon and Dixie Keith were united in marriage March 10, 1966, in Cimarron County, Oklahoma. They have spent their married life between the Springfield and Dunnegan, Missouri areas.
Eldon drove a truck delivering freight to various companies in Springfield, while doing mechanic work on the side nights and weekends in a rented garage. The farmers around Dunnegan were well acquainted with Eldon as he did repairs on their equipment, some of which were almost beyond repair, but he managed to make it work again, and they lasted many more years. Eldon’s time spent as a heavy equipment operator was the occupation he enjoyed the most, and one which he was very accomplished at doing. Eldon was a member of the Church of Christ.
Preceding Eldon in death were his father, Verne C. Means, his mother, Ina Chism Hasler, his step-father, Lewis Hasler; two grandsons: Larry Lee Means, and George Lee Wilkins; and both sets of his grandparents.
Eldon is survived by his wife Dixie Keith Means; four children from a previous marriage, Bonnie Ott and husband Robert of Dyer, IN, Lee Means, Jr. and wife Sara of Dunnegan, MO, Rick Means of Bolivar, MO, and Mary Nicholson and husband Robert of Apollo Beach, FL; and he and Dixie’s sons: Mark Means and wife Marion of Dunnegan, MO, Greg Means and wife Kris of Willard, MO; eight grandchildren: Gina Burrow and husband John of Colorado Springs, CO, Lauren haduch and husband Joe of Crown Point, IN, Ricki Sue Robertson and husband Raymond of Bolivar, MO, Jennifer Barham of Joplin, MO, Brad Barham of Belton, MO, Cole Means and Tori of Camdenton, MO, Ryan Means and wife Shannon of Morrisville, MO, and Sarah Means and fiancé Dallas Legan of Willard, MO; 11 great grandchildren; a sister Jacque McMullen of Mankato, MN; as well as many other relatives and dear friends.
Funeral services will be held at 1:00 PM Tuesday, January 19, 2016, at Pitts Chapel Bolivar, MO. Chaplain Jack Betts will officiate. As Eldon disliked wearing ties and suits he requested his pallbears wear jeans and a shirt. Pallbearers will be Brad Barham, Cole Means, Ryan Means, Joe Haduch, Dallas Legan, and Ty Bewley. Burial will take place at Lindley Prairie Cemetery Bear Creek, MO. Visitation will be held Monday, January 18, 2016, from 6:00 to 8:00 PM in the funeral home.
Online condolences may be made at: www.greenlawnfuneralhome.com. Memorial contributions may be made to the Mercy Hospice. Arrangements have been entrusted to Pitts Chapel Bolivar, MO.