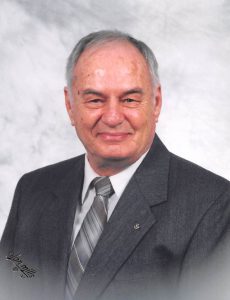 Eldon Wallace, 86, of Springfield, Missouri, peacefully passed away in his home on Monday, July 25, 2016, surrounded by his loving family.
Eldon was born October 3, 1929 to William McKinley Wallace and Mary (Honeycutt) Wallace in Hammond, Missouri. He graduated from Gainesville High School, attended Southwest Missouri State College, and joined the United States Air Force during the Korean conflict.
He married Betty Mae Hillhouse on Dec 17, 1952. Following his service in the Air Force, he joined the Federal Aviation Administration, installing and maintaining the FAA’s instrument landing system over a nearly thirty year career.
Eldon was also a talented, self-taught country western musician, playing nearly every stringed instrument. Best known as a fiddler, he also played guitar and mandolin and was a vocalist with country western, bluegrass, and western swing bands ranging from the “Morrocan Playboys” during his Air Force days in North Africa, to groups playing local festivals and shows across Southwest Missouri and at Silver Dollar City’s Music Festival.
He was predeceased by his mother and father, brothers Arthur Wallace and Hugh Wallace, and a sister Arlene Hillhouse.
He is survived by his wife Betty, two children Paula (Dwight) Newton, of Cabot, AR, and Randell (Carla) Wallace of Springfield, MO, three grandchildren, Amber (Justin) Ludwig, Amanda Wallace, and Caroline Wallace, three great grandchildren, Max, Alex, and Leo Ludwig, and numerous nieces, nephews and cousins.
He was a member of Ridgecrest Baptist Church.
Eldon battled his body’s many afflictions with strength and courage, in order to spend more precious time with his family and loved ones. He spent his final days as he spent much of his life, in the loving care of his wife Betty, and being doted on by his granddaughters who truly adored him.
Eldon is in a better place now, free of the pain and suffering of this physical world, but he will be greatly missed by all of his family and friends.
Visitation will be held at Greenlawn Funeral Home East, at 10:00 A.M Thursday 07/28/16, followed by services at 11:00 A.M. Burial will follow at the Missouri Veterans Cemetery in Springfield.