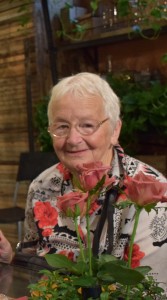 ELIZABETH MARIE KESSLER OBITUARY
Elizabeth Marie Champion, 78, of Reeds Spring, MO formerly of Troy, MO departed this life on May 29, 2016 at her home surrounded by her family.
Elizabeth was born July 31, 1937 in Pleasant Hill, MO the daughter of James and Gertrude Loup Kessler. Elizabeth was a 1956 graduate of Pleasant Hill High School. On June 1, 1956 she was united in marriage to Duward Ray Champion, her high school sweetheart.
Elizabeth began her working career at Monsanto where she worked with micro silica for microchips. She was part time dump truck driver for Ray while raising her three sons. She and Ray were owners of Champion Ready Mix and Champion Precast in Troy until retirement moved them to Reeds Spring in 1997.
Elizabeth had many talents all with the working of her hands. She loved gardening, crocheting, photography and oil paintings in her early years. After moving to Reeds Spring, she and Ray began cultivating their rock farm into a thriving blackberry, raspberry, strawberry and beekeeping farm as well as shitake mushrooms. She received the Greater Springfield Farmers Market Producer of the Year in 2014.
Elizabeth was always busy outside on the farm or working on one of her many craft projects or quilting. She created quilts for her grandchildren and great grandchildren to treasure. She most recently began sharing her talents with her church’s Diaper Bank.
Elizabeth was a breast cancer survivor. She never knew a stranger. She loved the Lord and her church and especially her friends in the Empty Nesters Group at Lifesong United Methodist Church.
Elizabeth was preceded in death by her husband, Duward Ray and her parents, James and Gertrude Kessler as well as her brother, George Kessler. She is survived by three sons, Anthony Ray and wife Kaye, Bruce Allen and wife Mary all of Troy, MO and Jeffrey Todd from Reeds Spring, MO. She was also blessed with six grandchildren, Steven and his wife Amanda, Ryan and his wife Jennifer all of Troy, MO, David and his wife Michelle of Ste. Genevieve, MO, Adam and his wife Adais of Misawa, Japan, Sasha and her husband Nick Phillips and Amber all of Troy, MO. She also left a legacy of ten great-grandchildren, Kaysen and Kamryn Champion, Aiden and Hadley Champion, Leah and Maci Champion, Landon and Lathan Miller and Paige and Cooper Phillips. She is also survived by one brother, James Kessler of Northfield, MN and one sister, Doris Self of Tulsa, OK. She also leaves behind many other relatives and friends.
A memorial service will be held June 4, 2016 at Lifesong United Methodist Church in Reeds Spring, MO. Memorial contributions are suggested in lieu of flowers to Lifesong United Methodist Church Diaper Bank at 360 Emerson Road, Reeds Spring, MO