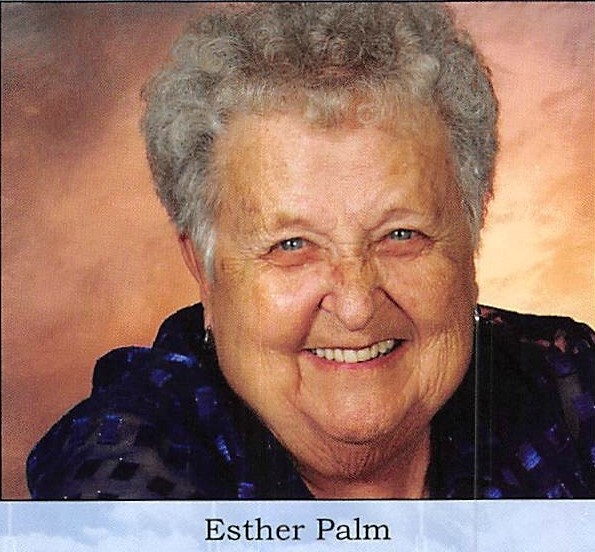 Esther Margaret Palm age 92, of Merriam Woods, Missouri passed away on August 28, 2018 at the Forsyth Care Center in Forsyth, Missouri.

Esther was a member of St. John’s Lutheran Church in Washburn where she was baptized, confirmed and married. She served as church organist while in high school and later at her church in Forsyth, Missouri. Wendell and Esther lived in Varna, Illinois and attended St. Paul Lutheran Church. In ladies aid, Esther and friends hand quilted full size quilts in Esther’s living room. Esther and Wendell visited and later retired in Merriam Woods, Missouri. In 1998, Esther and the congregation were involved in building the new church in Forsyth, Missouri called Shepherd of The Lakes Lutheran Church. Esther and her friends were busy designing the new kitchen. She was active in LWML (Lutheran Women Missionary League). She helped sew lap quilts for the needy and for nursing homes. Esther and her friends cooked wonderful meals at church for the holidays, funeral dinners and other occasions. She worked on the Evangelism committee and other church committees throughout the years.

Over the years, Esther and Wendell made many trips to visit Deb and her family in Phoenix and Dale and his family in San Diego. They also would return to Illinois to visit family and friends.

Esther was a cook & custodian at Mid-County High School (1963-1985) in Illinois while her children were grown up. She belonged to Junior Women’s Club and Home Extension in Varna. In Merriam Woods, Mo, she belonged to the Betterment Committee to raise money for the city. She was on the Taney County Election Board in Forsyth, Missouri.

Funeral services will be held on Tuesday, September 4, 2018 at 11:00 AM at the Shepherd of the Lakes Lutheran Church in Forsyth, Missouri with Rev. Mickey Wilkey officiating. Visitation will be one hour prior to services at the church.

Burial will be at St. Paul Lutheran Church Cemetery in Varna, Illinois at 1:30 PM on Friday, September 7, 2018.

Memorials may be made to the Shepherd of The Lakes Lutheran Church in Forsyth, Missouri in lieu of flowers in her memory.