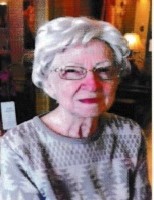 Ludean Clark, 95 passed away on Thursday, March 14, 2019 in Springfield, Missouri. She was born on a farm between Springfield and Strafford on December 11, 1923 to William E. and Beulah Dell (Willliamson) Wolter. She attended Strafford High School and played saxophone in the band and orchestra.
After high school she came to Springfield and attended Draughans Business College. After college whe worked for The Karchmer Company as a bookkeeper and married Louis Chambers.
Ludean and Louie had one son Charles who is a dentist in Aurora, Missouri. They had been married 24 years when Louie died of cancer. Sometime later she married Arthur Clark and they worked together on Artco, Inc.; a manufacturer of small farm equipment.
In Ludean and Arthur’s 35 years of marriage they traveled all over the world including Europe, Mexico, Panama, Hawaii, Alaska and Canada. Ludean also loved to quilt and make crafts.
She is survived by her son Charles Chambers of Aurora, Missouri; two grandchildren, Jason and Ryan both of Kansas City and three great grandchildren, Alex, Anna and Molly.
There will be a Memorial Service on 2:00pm, Saturday, March 23, 2019 at the Montclair, 1000 East Montclair St., Springfield, Missouri.