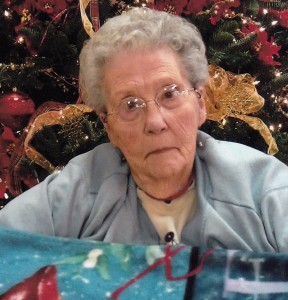 Eva Ann Cook, age 87, of Fair Grove stepped into the presence of her Lord on January 1, 2015. She was born on May 23, 1927, in Raymond, Kansas, the daughter of Alfred Wesley Lynn and Hazel Belle Cruth. On May 16, 1954, she was united in marriage to Billy Lee Cook, in Plains, Kansas. Eva accepted Christ as her personal savior at ayoung age. She was active as long as her health permitted, as a member of Community Southern Baptist Church, Fair Grove. She was a nurse for several years before she became a stay at home Mom for her girls, Sherry and Donna. She loved cooking, crafts, and being with family. She and Bill enjoyed many years of camping and service to the Lord as members of Missouri Campers on Mission. They developed many genuine and lasting friendships through the Missouri Chapter of COM.
Eva is survived by a daughter and son-in-law, Donna and Darrel Crawford of Fair Grove, son-in-law, Eldon Owen, of Springfield; four grandchildren, Jared Owen and wife Carla of Strafford, Joshua Owen and wife Connie of Springfield, Angie Rash and husband Wesley of Buffalo, and James Crawford and wife Shelley of Fair Grove, seven great-grandchildren and eight great-great-grandchildren.
She was preceded in death by her husband Bill; a daughter, Sherry Owen; a grandson, Jonathan Owen, her parents; three brothers, Neil, Estel, and Grover, and one infant sister, Orpha. Eva was aloving wife, mother, Grandma, aunt and friend. She will be fondly remembered and greatly missed, but the wonderful memories and legacy she created for her family and friends will live on forever.
A Celebration of Life Service, will be held at 10:00 a.m. Monday, January 5, 2015 in Greenlawn Funeral Home North, 3505 North National, Springfield, MO. Visiatation will be held Sunday, January 4, 2015 from 3 to 5 p.m. Burial will follow in Cedar Bluff Cemetery, near Fair Grove, MO. In lieu of flowers, memorial contributions may be made to the Community Southern Baptist Church Baptist Hill Camp Scholarship Fund, or to the James River Care and Rehabilitation Resident Christmas Fund, where Eva resided for the past 3 years and 11 months.