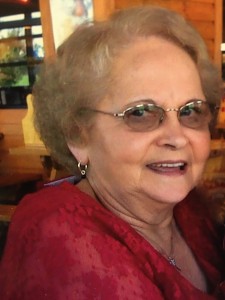 Evelyn Collins, of Springfield, MO, went to be with her Lord and Savior on Thursday, February 25, 2016. Evelyn enjoyed traveling, spending time with her grandchildren and great-grandchildren, and worshiping at her church home, Springhill Baptist Church. She was married to her loving husband, Gary, for 52 years, during which time they had a beautiful family, including 2 children, 7 grandchildren, and 3 great-grandchildren. Evelyn was preceded in death by her father, Carl Ellison; her mother, Pearl Wilson; her sister, Laveren McKellips; and an infant daughter. Evelyn is survived by her husband, Gary Collins; her sister, Lois Jones; her son, Robert Collins; her daughter and son-in-law, Cindy and David Boren; her grandchildren, Sondra and Ryan Uzzell, Jennifer Collins and Bryan Chauncey, Falesha and Joey Wise, Chelsea Malicote, Dason Boren, Libby Collins, and Cruz Boren; her great-grandchildren, Tristen Uzzell, Alissa Wise, and Ava Uzzell; and her very special friends, Belinda Ward, Georgeane Holman, and Sue Price. Visitation will be Monday, February 29, 2016 from 6-8pm and the Chapel Service will be held Tuesday, March 1, 2016 at 10am. Both will be held at Greenlawn North Funeral Home in Springfield, MO. Evelyn will be laid to rest at Eastlawn Cemetary in Springfield, MO.