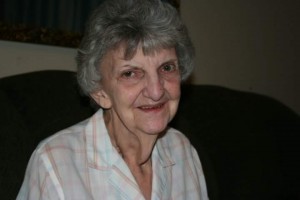 Evelyn D. Johnson, age 79, of Springfield, MO, passed away Thursday, April 23, 2015 at Mercy Villa. She was born November 27, 1935, in Chicago Heights, Il, to Julius and Pauline (Wagoner) Rekau. She was a graduate of Bloom Township High School, the Monday after graduation; Evelyn began her career at Illinois Bell Telephone Company, where she worked for the next thirty-seven years and four months. After retirement, Evelyn moved to Springfield, living here since 1993. She enjoyed watching t.v., camping, bowling, and spending time with her family, friends, and her dogs.
She was preceded in death by her parents, Julius and Pauline Rekau and her ex-husband Ronald E. Johnson, Sr. She is survived by one son, Ronald E. Johnson, Jr. and Chastity, Springfield, MO; three grandchildren, Caleb Cook, Gharrin Cook, and Aja Cook; one great-grandchild, Ezemah Cook; one sister, Pat Hart, Crown Point IN; two nieces, Kimberly Adair and Patti Schoiber; and a host of family and friends.
Visitation will be held from 6-8 p.m. on Thursday, April 30, 2015 at Greenlawn Funeral Home North. Memorial contributions may be made to the American Cancer Society or Breast Cancer Foundation of the Ozarks. Services have been entrusted to Greenlawn Funeral Home North, Springfield, MO.