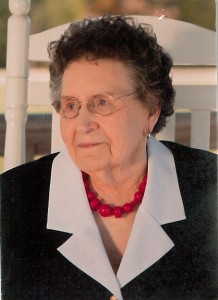 Fern Ruth (Bledsoe) Coppock passed into eternal life on July 1, 2015, secure in the knowledge of salvation by the redeeming blood of Jesus Christ.
Fern was born to Hershel S. and Lucy (Glidewell) Bledsoe on January 9, 1928, in Springfield, Missouri. Her mother died when she was three years old and her father remarried to Thursa Caffey, by whom he had two children in addition to Fern and her brother, Leon. The family moved to Richmond, California, during World War II, where Hershel found work in the Kaiser Ship Yards. Fern met Raymond Coppock, who was also working in the ship yards. They married in 1943, one month short of Fern’s sixteenth birthday. They returned to Hot Springs, Arkansas after the war, where their children Michael and Jane were born. They moved to Springfield, Missouri, in 1956, hoping to find better jobs, and to be close to colleges for their children. Fern worked for Lily Tulip Cup Company and Consumers Grocery Stores, while Raymond sold Snap-On tools. A third child, Crystal, was born in Springfield.
Fern and Raymond divorced in 1970. Fern moved to Searcy, Arkansas, in 1999 to be near her daughter, Crystal.
Michael says of his mother, “She was a woman of deep Christian beliefs and could quote a Scripture to fit every occurrence in life. She imparted those beliefs to me, so is present in my life every day. There was no better mother.”
Fern is survived by her son Michael of Lincoln, Massachusetts, his wife Susan, and their daughters and their husbands and three children; her daughter Crystal Muirhead and her husband Cris, of Searcy, Arkansas; her brother H.S. “Jim” Bledsoe and his wife Janice, of Willard, Missouri; her sister Martha Marlin and her husband Bill, of Marshfield, Missouri; and many nieces and nephews. She was predeceased by her brother, Leon, and her daughter, Jane.
A visitation is scheduled for Tuesday from 6:00 to 8:00 pm at Powell Funeral Home in Searcy. Another visitation is scheduled for Wednesday from 6:00 until 8:00 pm at Greenlawn Funeral Home North in Springfield, Missouri. Funeral services will be held Thursday at 10:00 am at Greenlawn Funeral Home North with interment to follow at Greenlawn Memorial Gardens.
Arrangements by Powell Funeral Home of Searcy, www.powellfuneralhome.net and Greenlawn Funeral Home, North, www.greenlawnfuneralhome.com.