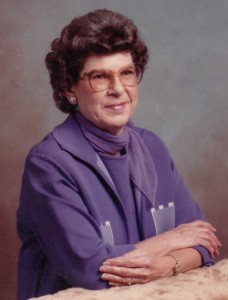 Frances Brown Brixey, 93, passed away on Saturday, November 29, 2014 in Strafford, MO. She was born August 6, 1921 near Fair Grove, MO. to Andrew Jackson Houk and Ethel Reynolds Houk.
Frances graduated from Fair Grove High School in 1939 as Salutatorian of her class. In May of that year she married Hershel W. Brown. They were married 40 years until his death in 1979. To this union two daughters were born. Frances was a homemaker and worked with her husband on their dairy farm near Fair Grove, She moved to Marshfield, Mo after her marriage to John B. Brixey in 1986.
Frances enjoyed meeting people while working in the gift shop at 76 Truck Stop in Strafford. Her many interests included sewing, quilting, singing with the Sweet Adelines, gardening, Marshfield Garden Club, and Strafford Quilting Club. She was an active member at Bass Chapel Baptist Church and Marshfield First Baptist . Upon moving to Springfield Frances joined Grandview Baptist.
She was preceded in death by her parents; husband Hershel W. Brown from a car accident; sister, Mary Ringenberg; brothers, Lyle and Duane Houk; son-in-law John S. Jones; and husband John B. Brixey.
Survivors include daughters: Jackie Potter and husband Rex of Thousand Oaks, CA.; Judi Jones of Fort Myers, FL; grandchildren; Jack, Stephen and Gary Potter, Leslie (Jones) Olson and husband Kirk Olson, great-grandchildren: Steven and Leanne Olson, and several nieces and nephews
The family wishes to thank all the caring staff at Strafford Care Center and Preferred Hospice who helped care for Frances. A very special thank you to friend and caregiver, Dot.
Visitation is Tuesday, December 9, 2014 at Greenlawn Funeral Home North Chapel from 1:00 pm until 2:00 pm. Funeral Services to follow visitation at 2:00 pm. Burial at Bass Chapel Cemetery, Strafford, MO. following the service.
Memorial contributions may be made to Grandview Baptist Church Building Fund, 3504 E. State Hwy AA Springfield, MO. 65803, or a charity of your choice.