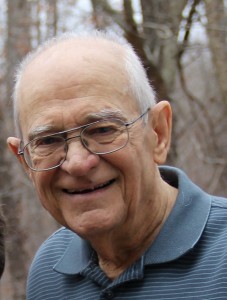 FRED FANTON THOMPSON
Born on 5 April 1930, son of Charles Samuel Thompson and Edith Pearl (Albert) Thompson in Avilla, Jasper County, Missouri. He passed away suddenly the morning of 18 June 2016 at Mercy Hospital in Springfield.
He is survived by his wife of 65 years, Virginia, who lived at their Springfield home; his brother, Bobby Gene Thompson and his wife Lavon of Lee’s Summit, Missouri; 4 children: Tim of Branson West; Gail and her husband Gary Drennan of Marshfield; Kerry and his wife Shelli of Shawnee Mission, Kansas and Brenda and her husband Steve Barclay of Rogersville, Missouri; many grandchildren and great-grandchildren.
Fred was born and grew up in Avilla, Missouri and graduated from Carthage High School in 1948. He played football and ran track while in school. After one tackle he’d made, he must have rung his bell, because he got up and headed to the wrong huddle. Twice. He was number 9, captain of the football team, played Full-Back, the hero of the team. He won a scholarship to SMS College now MSU. To this day, he LOVED his football and welcomed talking about it.
And on September 17, 1950, he married Carthage High School 1948 Homecoming Queen, Virginia Lee Michaelis, and for 65 years, they have been inseparable. He has been daily expressing his love and devotion to her for over 65 years.
He was confirmed in Faith Lutheran Church in Carthage in 1950, and after moving to Springfield in 1960 became a member of Trinity Lutheran Church in Springfield, where Fred and Virginia raised their four kids.
In 1951, before their first son, Tim was born, Fred was drafted into military service obtaining the rank of Sergeant First Class in the 31st Infantry Regiment Association of the Army and served in war in Korea. He earned the Marksman medal.
Fred worked at many jobs in life including the wheat fields in Kansas, Beech Aircraft, Reyco and retired in from M.D. Pneumatics as a Production Control Manager in 1988.
He loved working with wood, and was a skilled woodworker. Photos from his darkroom produced many memories that we can still enjoy to this day. He was a friend to all animals and especially loved dogs.
With retirement Fred and Virginia enjoyed RVing in Minnesota and in Florida. There were many trips in between, going to Texas, the Keys in Florida and a 50th anniversary through Nova Scotia, Canada. They loved being outside in nature, and spent many, many hours on the rivers, and lakes and beaches marveling and enjoying God’s creation. They had one last visit to the Gulf beach with family in 2013 where they held hands and walked the beach.
He was smart and had a great sense of humor. He loved his wife and family and enjoyed blessing them in every way and on every occasion that he could. He talked often about their lives and there were no regrets. He enjoyed life! He enjoyed family! He blessed everyone he knew!.
Fred was a man of his word, did what he said he’d do. He was a man of integrity and honor. In him you could see love, joy, peace, patience, kindness, goodness, faithfulness, gentleness, and self-control (Gal. 5:22-23). In him you could see provision and protection for the family and guiding his family as Head of the household. As family was called Saturday and told of his passing, Virginia’s cousin, Jackie, also flower girl at their wedding, maybe said it best. She said the one word that always described Fred for her was he was a gentleman. Yes he was. A gentleman, and a GENTLE MAN.
Visitation will be at Greenlawn Funeral Home East in Springfield, MO Wednesday, June 22, 2016 at 9:00 a.m. until service time at 9:30 a.m.. Burial will be at Missouri Veterans Cemetery in Springfield, MO with full military honors.