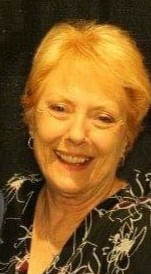 She married her high school love John Kaufman of Republic, Missouri on August 26, 1966.   Together they had two daughters, Shana Lee, and Angela Kay.

She was preceded in death by her daughter, Shana Lee Kaufman; parents John and Ada Lee Underhill; sister, Karol Wollenberg; and aunt and uncle, Rick, and Jo Poynor.

Her full-time job of wife and mother took her around the world as her husband was stationed across the United States, Germany, and Korea until his final station in Hampton, Virginia.   Her love for “that Kaufman Boy” spanned 54 years of marriage and now her eternal life.

“Gaye” never met a stranger and had an incredible gift of compassion for anyone.  Her capacity to listen and make you feel that you were the only person in the world at the time was a blessing.

As a friend she was a hugger and did not care if you were not – you were going to get a hug.   She loved to laugh, tell grandma-jokes, hang in the kitchen, or just sit next to you and listen.

As a sister, she was loving and accepting of just the way you were. “Whatever floats your boat” was one of her favorite sayings.

As a mother, Gaye, was the Band Booster Mom, Fruit Sales Coordinator, and supporter of her daughter Angela.

As a mother she let her daughter grow, always there, one step behind when needed.

As a mother she let her daughter falter, always there, one step behind when needed.

As a grandmother, “Maw Maw”, she was a constant reminder of love, support, and importance.  She was their cheerleader at football, water polo, swim, and dance.   The grandmother in the stands yelling at the ref’s or judges between plays and between conversations with everyone around her.

As a mother-in-law, she was my 2nd mom – she was my friend long before she was “Mom”.

As a wife, she was blessed – “that Kaufman boy” is still the Love of her Life.  The two were inseparable throughout life and love.  To witness their love was to witness God’s grace – that we may each share a life so full of Love, Family, and Friendship; that we may touch as many as she did in the kind and loving way that only she could.

As a child of God, she demonstrated unconditional love with everyone.  Her famous way of saying good-bye with “Be fearful, I Love You, and I Like You Too”