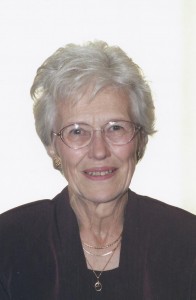 Geraldine Brazeale McIntosh was born on July 30, 1927 in Christian County Missouri and departed on January 29, 2015. She was the daughter of Samuel W. and Gena Page Brazeale. Gerry was preceded in death by her parents, brothers; Walter, Herbert and Lyle and sisters; Wanda and Ailene Maples
Gerry graduated from Strafford High School in 1945. On May 15, 1946 she married Edward L. McIntosh. Together they raised four children that survive; Gena Love, Donna (Michael) Pinegar, Steven (Linda) McIntosh and Myra (Craig) Godsy. While raising her children Gerry was a stay at home Mom. She was heavily involved in her church, Parent-Teacher Association, Girl Scouts, Boy Scouts and whatever events her children were participating. Her children gave her and Ed 10 granchildren and 11 great grandchildren. Ed passed away in 1999.
In 2004 Gerry married Ross Spencer. Gerry is also survived by two brothers Jack & Bill Brazeale. Additional survivors included numerous nieces and nephews and extended family of friends. She inherited four step-children with her marriage to Ross. Julie (Steve) Lindsey, Janine McGuire, Leesa Foster and Joseph (Laura) Spencer. Additionally, she inherited 8 grandchildren and 10 great grandchildren. Gerry and Ross enjoyed several years together, fishing, going to shows in Branson and being with their somewhat large family.
Ross survives and resides at the Missouri Veteran’s Home in Mount Vernon, Missouri. Gerry is also survived by her brothers Jack Brazeale and Bill Brazeale. Addition survivors are numerous nieces, nephews and her extended family of friends.
Services for Gerry will be at 11:00 A.M. Monday, February 2, 2015 at Greenlawn Funeral Home East with burial in Selmore Cemetery. Visitation will be from 10:00 to 11:00 A.M. before services in the funeral home. At the family’s request, in lieu of flowers, contribution may be made to Alzheimer’s Foundation of America 322 Eighth Ave., 7th fl. New York, N.Y. 10001