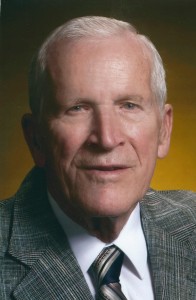 Gilbert F. Beutler of Springfield, MO passed away peacefully at Cox South on January 19, 2016. He was born April 7, 1924 in Clever, MO to Fred and Lena (Hoffman) Beutler. He had three older brothers: Ernest Beutler, Edward C. Beutler and Harold G. Beutler. Gilbert’s father, mother and brothers all preceded him in death.
Gilbert married Viola (Pat) Goodwin June 30, 1946. They were married 63 years at the time of her death in 2009. They had a son, Kenneth M. Beutler, who was killed in an auto accident in 1972.
Gilbert proudly served in the U. S. Air Force during World War II in the Pacific Theater. He worked in the accounting department of Campbell 66 Express for more than 40 years. After his retirement he worked as a land surveyor for several years.
Gilbert was an active member of South Haven Baptist Church who enjoyed attending services and staying active in the church. His relationship with Jesus Christ was the most important part of Gilbert’s life.
Gilbert is survived by sibling-in-laws, several nieces and nephews, cousins and many friends that have been established over the many years of his life.
A funeral will be at the Greenlawn Funeral Home East. Visitation will be on January 24, 2016 from 2 PM – 4 PM. A memorial service will be Monday January 25 at 10 AM with burial to follow.
Gilbert’s favorite verse in the Bible was Matthew 6:33-34, “But seek first his kingdom and his righteousness, and all these things will be given to you as well. Therefore do not worry about tomorrow, for tomorrow will worry about itself. Each day has enough trouble of its own.”