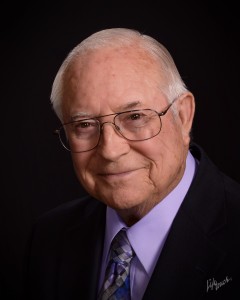 Gilbert Lee Grapes was born January 31, 1931, and went to be with the Lord on October 25, 2014 at the age of 83. Gil was born in Torrington Wyoming to De Forest and Ruby Grapes. He joined the US Air force in 1950 and served for 4 years. He became an Ordained Assemblies of God Minister in 1959 and pastored various churches for over 20 years. Gil later worked at Central Bible College for 16 years, the Assemblies of God Headquarters for 2 years, and retired from Evangel College after 21 years. Gil was an active member, Sunday school teacher, and volunteer at Battlefield Assembly of God Church in Battlefield, MO. Gil was a man filled with the Spirit of God, who was always sharing the love and message of Jesus. Even in his last days in the hospital Gil was witnessing to the hospital staff, preaching to his friends and family, and prayed a blessing over his two daughters. Gil passed peacefully, surrounded by his family, after a short battle with pneumonia.
Gil was preceded in death by his parents De Forest and Ruby Grapes.
Gil is survived by two brothers Dee Grapes and John Grapes and a sister Carolyn Crawford. His memory will also be celebrated by his wife of 53 years, Mary Jo, his two daughters Angeline Hein and Michelle McKenzie, their husbands Chris Hein and Brad Mckenzie, and three grandchildren, Katrina Hein, Collin McKenzie, and Sarah McKenzie. He is also survived by several nieces and nephews, and countless friends.
Services will be held at Greenlawn funeral Home East with family visitation Wednesday at 5-7pm and a memorial service Thursday at 10am. Interment will follow at noon at the Missouri Veterans Cemetery with full military honors.