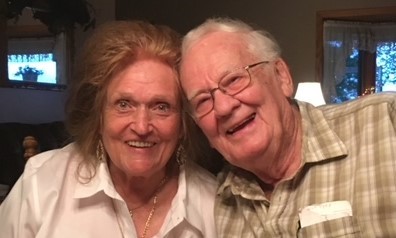 Doyne Jennings went into the arms of Jesus in his home after a sudden illness on December 21, 2020.  Thomas Doyne Jennings was born on November 24, 1932 to Vernon Walker and Zelma Anna (Cook) Jennings of Bell City, Missouri.  Gladness joined him there on December 27, 2020 also in their home & succumbing to sudden illness.  Gladness Marvel (Beard) Jennings was born on September 10, 1929 to Reverends Frank H. and Ann Margaret (Mikkelsen) Beard in Modesto, California.

Doyne & Gladness (Beard) met at North Central Bible Institute in Minneapolis, MN where Doyne was focusing on Bible Ministry, Gladness on Music Education, attending NCBC and MacPhail College of Music simultaneously.  It was an unlikely place for a mostly Southern girl and a St. Louis, Missouri boy to meet, but God had a plan.  Gladness was already uniquely gifted in piano, organ, accordion—anything with a keyboard!  As a matter of fact, the first time Doyne laid eyes on Gladness, she was playing a piano that, for some reason, had been temporarily placed in a dormitory lobby.  A crowd of students had gathered to listen and Doyne wandered up to join.  This sparked a love affair that would eventually last for 67 years.  The two were united in marriage at Gladness’ home church (pastored by her parents) in Brownsville, FL on December 31, 1953 after graduating from NCBC in May of the same year.

Together, God launched their powerfully anointed ministry that included pastoring, A/G Southern Missouri District Youth and Children’s leadership (D-CAP), and missionary evangelism.  As noted, Gladness was already a talented musician when they became friends.  Doyne gained help and discipleship in preaching from Gladness’ Dad, Reverend Frank H. Beard.  “Doyney Boy,” as Frank liked to call him, blossomed into an anointed preacher of God’s infallible Word while Gladness shared her extraordinary musical talents of song writing, playing, and singing for her Lord.  Her gifts were not only skilled, but anointed by the Holy Spirit as well.

Always together, through thick & thin, they ministered in churches, tents, youth camps, and countless personal encounters wherever the Lord led.  One very special aspect of Doyne & Gladness’ ministry was encouraging Pastors and their families all around the United States and even abroad.  One unique way God led them to encourage Pastors & their wives was by taking them on tours to Israel along with Pastor Wendel Cover (Potomac District A/G), who organized these trips to the Holy Land.

“Well done, good and faithful servant; you were faithful over a few things, I will make you ruler over many things.  Enter into the joy of your Lord.”  Matthew 25:21

In lieu of flowers contributions may be made to; Maranatha Village 233 Norton Road Springfield, Missouri 65803