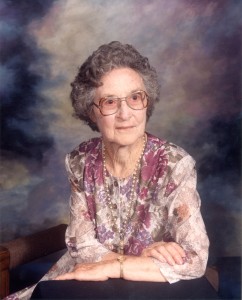 Gladys Mae Bastings was born at her home in Putman, Oklahoma on April 3, 1916. She died in Springfield, Missouri on March 29, 2015 at just one year and one week short of 100 years old.
Her parents had immigrated from England in 1912. Gladys’ mother was a midwife and delivered many children. She had two brothers and two sisters. Gladys herself was a twin but said that she and her sister were nothing alike. Living on a farm in Oklahoma was a hard life in those days. It meant waking up early and picking cotton in the field. She went to school through the eighth grade, but had to work to help make a living for the family. She remembered the dust storms that occurred in the 30’s.
Her first car was a Model “T” and recalled how she bounced across the fields of Oklahoma taking water to the field workers. She did many things such as raising turkeys, milking cows, and working for many years at the Big Smith Overall factory, sewing men’s pants in Neosho, Missouri.
It was a car accident that changed Gladys’ life the most. Her father was killed and her mother had a broken neck that caused her near death. They had just moved to a farm near Neosho, Missouri. After the tragedy, the children were forced to the farm to do many jobs. Just out of the eighth grade, Gladys chose to be her mama’s caretaker and work in the home. She never married or had a family of her own, but her nieces and nephews had always been so dear to her, treating her like a mother.
As a young person, she attended a “River” Brethren Church where the ladies all wore little net caps. Then in Missouri, she served the Lord in a Full Gospel Tabernacle Church, where she served as treasurer for thirty-five years. She remembered her car being full of children as she would pick them up and take them to Sunday School.
Gladys felt so grateful to the Lord for her apartment in Nixa which she said was the nicest home she had ever lived in. She moved there during her 90Th year from Neosho, Missouri. She lived in Nixa for nine years and had been faithfully attending Nixa First Assembly Church until her illness.
Gladys is preceded in death by her parents, Robert John and Ethel Gertrude; 2 sisters, her twin Violet and Eva; 2 brothers, Alfred and Robert; and her nephew, Robert Dale.
She is survived by her 3 nieces and their spouses, Karen and Harold Cox, Linda and Scott Reynolds, and Susan Begley; her nephews, David and Debbie Bastings, Chris and Linda Kiriakou, Eddie Bastings, Danny Bastings, Roger Bastings and Gene Bastings; and a very special friend Janice Cheffey.
Services will be held Wednesday, April 1, 2015 at 10:30 a.m., in Greenlawn Funeral Home South. Burial will take place at Hazelgreen Cemetery in Boulder City, MO following the service.