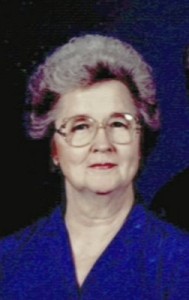 Gladys Mae Dickey, age 85, of Springfield, passed away Monday, January 11, 2016. She was born October 14, 1930, in Springfield, MO, to Henry and Lottie (Garrison) Gerhart. She was a member of Hamlin Memorial Baptist Church. She was a homemaker, active as a children’s Sunday school teacher and enjoyed cooking, gardening and helping others.
Gladys was preceded in death by her parents, four brothers and one sister. She was married 66 years to her husband Jim Dickey who passed away in 2011. She is survived by a son Michael B. Dickey, and his wife Judy and a daughter Pat Dennis and husband Kevin all of Springfield, her sister; Gerry Hill, of Springfield, her grandchildren: Jason and Teresa Dickey, Jim and Cathy Dickey, Aubrey Jones, Marlin and Ashley Dennis, and Rick and Adrianne Castillon. She is also survived by eleven great-grandchildren, Ryan, Reagan, Lauren, Michaela, J.P. and Nathan Dickey, Payton Garrison, Aiden Castillon, Gabbie, Gus, and Gannon Dennis, and a host of nieces and nephews
The family would like to thank the staff of Woodland Manor for their care of over 11 years.
Funeral services will be held at 1:00 p.m. Thursday, January 14, 2016, at Greenlawn Funeral Home North, Springfield, MO with Rev. Calvin Maberry officiating. Burial will be held in White Chapel, Springfield, MO. Visitation will be held from 6:00 to 8:00 p.m. on Wednesday, January 13, 2016 at the funeral home. Memorial contributions may be made to the Hamlin Memorial Baptist Church building fund. Online condolences may be made at www.greenlawnfuneralhome.com.